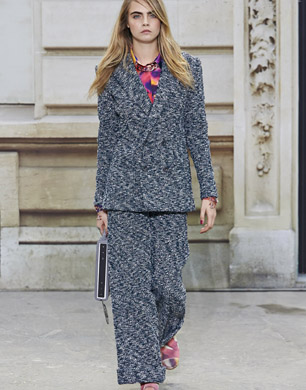 Feminism, Kimye and farewells; there were talking points aplenty at Paris Fashion Week. With some of the most iconic and big-name designers, Paris ended the month of shows on a high. It was the week Karl Lagerfeld taught us how to protest in style, Jean Paul Gaultier took his final ready-to-wear bow, and the Kardashians made headlines on and off the runway. But that aside, here’s what we learned at the Paris Spring/Summer ’15 shows…

There’s only one way to kick off our Paris Fashion Week round-up and that is with the eternally-extraordinary Chanel show.

After last season’s supermarket extravaganza, what could King Karl possibly do to top our expectations? The Boulevard Chanel was the answer. With the Grand Palais transformed into a grand tall-building lined Parisian street, supermodels stormed the catwalk en masse, led by Cara Delevingne and a megaphone, with a protest-imitation finale. Karl’s girls took to the streets in protest, toting feminist placards reading ‘Be Your Own Stylist’ while carrying box clutches decorated with the slogans ‘Make Fashion Not War’ and ‘Ladies First’. Incredibly of-the-moment, Lagerfeld once again proved his masterful showmanship and sheer genius.

But what about the clothes? Well, the tweed power suits were our stand-out favourites, each one as fabulous as the next, as were the 70s inspired pink-tinted glasses. There weren’t any trends here, just magnificent piece after magnificent piece. From navy tailoring to skin-tight striped sweater dresses, art deco organza’s, splashy watercolour prints and those to-die-for gold shoe boots.

Over at Balmain, Mondrian influences played out in bold geometric primary hues in grid prints and skin-tight leather and PVC cage dresses (as worn by Kendall Jenner as proud momager Kris beamed from the front row)- this was art at its most sexy. And take note, fashion as art is a striking recurrent theme for Spring/Summer 15. 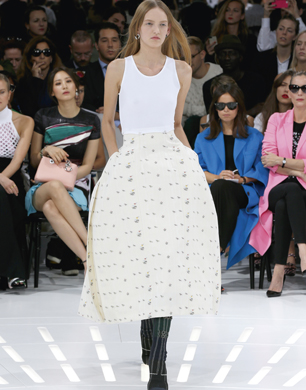 As always, Paris proved to be a varied array of powerful and truly unique collections. So from Balmain’s strikingly graphic silhouettes we move onto Christian Dior’s modern minimalism. Here, Raf Simons combined the 18th and 22nd Centuries and in turn created a brilliant collection. Taking inspiration from traditional 18th century French costumes and teaming with a simple white vest for modernist minimalism. It was an eclectic mix of Edwardian smocks, highwayman inspired coats coming in burgundy silk and gold and 18th Century court coats in orange silk teamed with Bermuda shorts. It doesn’t sound like it should work, but it was in fact extraordinary.

The 18th Century references didn’t stop at Dior. Over at Valentino, Italy and most specifically, the 18th Century Grand Tour was the inspiration for Valentino’s romantic poetic/graceful SS15 collection. From artisanal patchwork dresses to sheer silk dresses floating around the body, gowns embroidered in seascapes, scarf print silk jumpsuits and gold trinkets and flat knee-high gladiator sandals, it was a collection which highlighted the design duos beautiful craftsmanship. 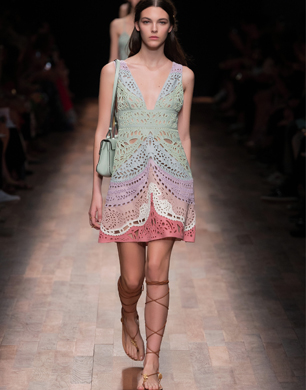 The romance continued at Chloe in a collection dedicated to the label’s founder Gaby Aghion, who passed away a day prior to the Spring/Summer show. Designer Clare Waight Keller captured the essence of the original Chloé girl: romantic and bohemian but still polished. Picking up where Gucci left off in Milan, Chloe confirmed that the 70s is king for next season. Indigo denim and beautiful bohemian floor-length dresses, button front A-line skirts and to-die-for suede wedge sandals. And our highlight? Without doubt the feather-light dresses suspended from the most delicate of spaghetti straps.

At Balenciaga, the theme couldn’t have been more different. With Kim, Kanye and baby North (complete in a full mini Balenciaga look) front row, the tone was sporty – and dark. The models stormed the smoke filled glass catwalk in flat sandals, each as desirable as the next. With tonnes of mesh and sporty fabrics, lots of all-black, silhouettes were lean and athletic, pants were tight and dresses cut like a glove. Net tops and skirts were added into the mix, and the house’s embellishment came in the form of subtle panels across pockets and the décolletage. It was a modern take on the house’s signature coats and gowns and one where Alexander Wang began to break free from the traditions and archives of the past.

Hedi Slimane’s latest heroine is a glam rock groupie, just as the likes of Lenny Kravitz, Lou Doillon, Peter Doherty and Catherine Deneuve who were sitting front row proved. The thick tights and sixties Mary Jane’s of last season have been replaced with platform boots and the sheerest of tights. This was glam rock, but more elaborate, desirable and cool than ever before. Mixing Slimane’s LA lifestyle with Parisian couture sensibilities, there was a mix of suede cropped jacket, lavish embroidered capes and dresses cut to Slimane’s signature mini length. If you take just one thing from this collection, make it the silk neck tie. Worn to add attitude, it’s the simplest yet most effective accessory of the season. 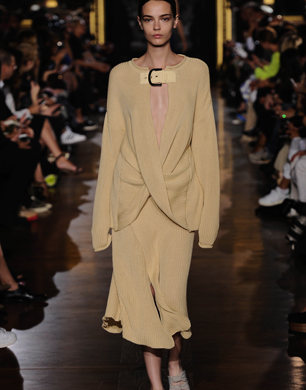 Models with their faces framed in black lacquer and Marc Quinn flower sculptures lining the catwalk? Nothing quite beats the beauty and impact of a McQueen show. In a strict palette of blossom pink, red, black and cherry blossoms prints peaking from panels in coats and dresses, Sarah Burton offered up yet another extraordinary show. Deconstructed kimonos, body harnesses and flared trouser suits were amongst the offering as well as a selection of divine hand-cut floral appliques dresses, so as you can imagine it’s not a collection to look to for trends but one with serious power and skill and one that is boldly unique.

And so onto Kenzo where Spring/Summer ’15 sees a continuation of Humberto Leon and Carol Lim’s well-honed skater aesthetic. Certainly less sporty than past seasons, Kenzo’s palette for spring is much more paired-back with blue, white and black as the sole colour-ways. With more slouchy, looser silhouettes and cut-out details on form-fitting dress, stand-out pieces came in the form of over-sized denim shirts, over-sized skater trousers-come-palazzo pants and the cool abstract prints applied to trouser suits and flippy dresses. This was a quietly confident and seriously want-able collection.

Continuing the theme of wearability and approachability, Stella McCartney offered a collection designed with comfort in mind where warm-weather wool is the striking new concept to buy heavily into next spring. Stella further cemented denim’s stronghold for Spring/Summer ‘15 while knitted dresses knotted and twisted over the body are sure to be instant sell-outs. In addition, everything from the cotton smocks to the loose silk jumpsuits and trenches in billowing parachute silks, you’ll what it all. 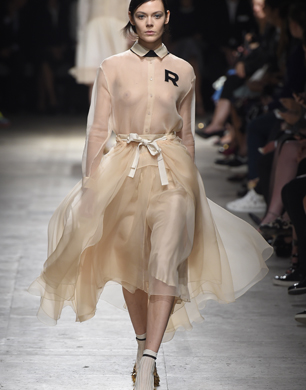 Just two seasons in and Alessandra Dell’Acqua is shaking things up at Rochas. Adding utility belts to everything from hummingbird bejewelled evening coats and ballgowns, there was a more modern feel to the traditionally romantic style of the house. Opulent and airy, this time with Dell’Aqua’s twist. In addition, statement shoes are fast becoming the label’s signature pieces and here once again they were just as fabulous as we’d hoped. Tinsel covered sling-back courts, what’s not to love?

Over at new-name-to-know label Sacai, the unexpected mash-ups of prints and patterns made our hearts sing. Khaki military dresses with navy floral inserts were stand-out hits while there were also paisley prints, florals and stripes aplenty. Splicing ideas together there were utility shirts with puffs of volume, military pieces morphed into eveningwear. A collection worthy of praise indeed.

A neatly cut flare is a certified essential of the Spring Summer 15 wardrobe, as confirmed by Giambattista Valli. Offering a pink, white and black palette, the pretty, tactile collection played with textures, prints and proportions to maximum feminine effect. Macramé lace, floral-printed leather and patchworks and cut-out detailing on carefully proportioned mini skirts, boxy crop tops and dresses all added up to a collection you wanted to touch – and own.

Compared to big names which pack the schedules at Paris Fashion Week, Cederic Charlier is a relative newcomer. Here at StyleNest we’ve become early fans of his use of colour and the balance between approachability and striking design. And for Spring/Summer ‘15, it is his stripy metallic hued tailoring which has won our hearts. Those, as well as the subtle multi-coloured layered dresses and ruffled dresses. Unique yet approachable, just how we like it. 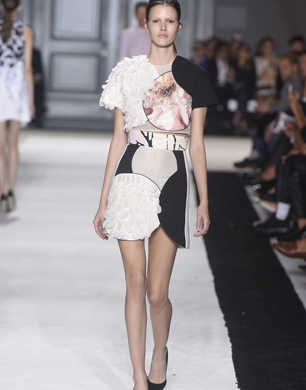 In a fitting send-off to his ready-to-wear offering, Jean Paul Gaultier practically brought Paris to a stand-still with his much in demand ‘end of an era’ party-come-show. With Catherine Deneuve, Rick Owens, Alber Elbaz, and Gareth Pugh in the audience, the party atmosphere continued as the models appeared on stage in a beauty pageant show. Showcasing the designer’s most famous work, Gaultier wowed with a section dedicated to magazine editors- turning Lindsey Wixson into a very convincing Suzy Menkes, Chantal Monaghan into Carine Roitfeld and Magdalena into a young Grace Coddington.  Farewell JPG.

Compared to Jean Paul Gaultier, J.W. Anderson is a relative newcomer on the world stage. But the long awaited arrival of the British designer’s first collection for Loewe will guarantee global recognition. Many of Anderson’s signature aesthetics were apparent, and the label was all the better for it. The logo and packaging have been revamped and so have the clothes. Offering an organic aesthetic which references the label’s Spanish heritage, Anderson moved away from the former eveningwear and offered something altogether more ethereal and simple. Wide sash belts, leather trousers, light and airy blouses, linen and cotton column dresses, latex T-shirts and foldable bags. Easy elegance with added cool.

Another designer pushing his aesthetic in a new direction for Spring/Summer ’15 is Riccardo Tisci at Givenchy. Moving away from his streetwear aesthetic of past seasons, Tisci opted for something altogether more powerful and with serious sex factor. While fragile lace was juxtaposed with black leather, the pink, white and black palette offered something severe yet undeniably pretty. The eveningwear-heavy offering was rock-hard glamour in its most beautiful incarnation. Studded leather dresses, hot pants covered in microscopic beads and Pirate blouses referenced a sensual Roman Gladiator that the likes of Kim Kardashian (who was front row with North) will pull off with ease.

From one knock-out collection to another, it was the turn of Nicholas Ghesquiere to round off the week in true style. Once again wowing us with true brilliance, the former Balenciaga designer continued his A-line silhouette and developed last season’s cool retro feel. Bra tops under jackets teamed with velvet cropped flare trousers, colourful strips of leather, quilted biker jackets, raw denim jeans, shoes with flower shaped heels and minidresses encrusted with sequins – there was so much to take in. It was eclectic but made for wearing and easily one of our highlights of not just Paris, but of the entire season.