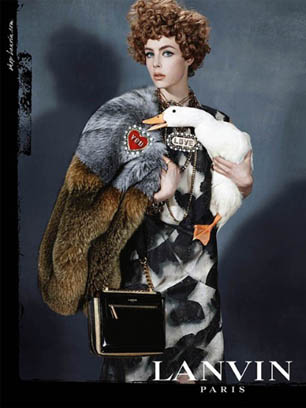 Currently giving Miss Cara Delevingne a run for her money on the modelling scene is fellow Brit, Edie Campbell. Proving just how versatile she can be, Edie appears in Lanvin’s AW13 campaign in a series of looks, played out in now less than six femme fatale inspired roles.

From the wild-haired rebel in scarlet red silk to the curly-haired, goose-wielding dame dripped in fur; each role and image has a beautiful filmic quality. There’s reference to the Hitchcock Heroines too as Edie does her best Janet Leigh impression, as well as a wardrobe’s worth of beautiful Lanvin gowns, from streamlined prints to jewel encrusted emerald silk.

Elbaz injects some light relief into the campaign too, with a treasure trove of statement accessories. ‘Cool’, ‘Help’ and ‘Happy’ slogans hang from chunky pendants and adorn heart-shaped brooches, for a quirky finishing touch.

Don’t expect the Lanvin campaign to be the last time you’ll spot Brit chick, Edie this season. The 22 year old has also bagged herself the AW13 campaigns of JIl Sander and Marc Jacobs. And if that wasn’t enough she’s also found the time to graduate with a First Class Degree in History of Art from London’s Courtauld Institute of Art.

Turns out you can have brains and beauty.