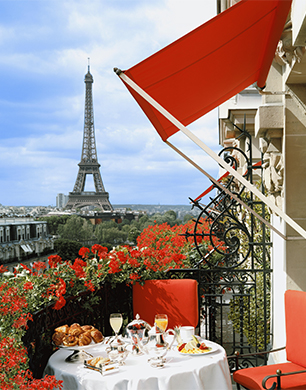 Inaugurated in 1913, the Hôtel Plaza Athénée opened its doors with just sixteen guestrooms on each floor and only one restaurant, although it comes as no surprise that it quickly became one of the most fashionable addresses in Paris, with many of the city’s artists dining at the hotel after a night at the theatre. Once Christian Dior set up his couture house right next door on avenue Montaigne the hotel soon became synonymous with fashion and Haute Couture, and its place in Parisian history was firmly secured.

Now boasting 208 rooms and suites, five restaurants, and the revered palace status – bestowed upon hotels by the French government to elevate them above five-star – the hotel is still the address to see and be seen in, and its decadent style and flawless service make for what can only be described as a magical stay in the City of Lights.

Opening up the room in any five-star hotel always has an air of anticipation, and here rooms and suites are gloriously ornate, with huge beds, beautiful antique furniture and exquisite fabrics; notably the hotel calls up on Maison Lesage for its embroidery, the same house which also works with Chanel. Each guest room is individually decorated to give the impression of being in a Parisian home, with rooms up to the sixth floor featuring an opulent 18th century style, while those on the seventh and eighth have been furnished in an Art Deco fashion. The marble bathrooms are perfect for two – with large rain showers, double sinks and aromatherapy products to create your own mood – and sinking into the huge tub, with bubbles courtesy of Guerlain, is particularly indulgent. For some rooms however, the pièce de résistance is the spectacular view of the iconic Eiffel Tower, notably the Eiffel Suite, which Carrie Bradshaw fans may recognize from a certain TV show. 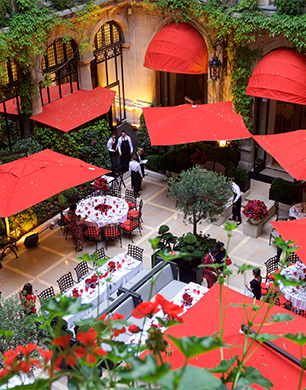 Downstairs, the soothing spa offers treatments courtesy of the Dior Institut, respecting the hotel’s close history with the house. Along with a private hammam and steam room in each changing room there is also a well equipped fitness room, but for a more romantic experience book the couple’s treatment room for some pampering.

There are plenty of options for dining, drinking, and people watching, particularly in La Galerie, which serves everything from breakfast to light lunches, afternoon tea, and pre-dinner drinks. The hotel’s Le Relais Plaza restaurant is often overlooked in favour of its more famous neighbor Alain Ducasse au Plaza Athénée, and while Ducasse’s Michelin-starred gastronomy does offer a night to remember, dining at Le Relais should also not be missed. Rich with fashionable history – Yves Saint Laurent was a regular, as were Christian Dior’s models, whom he used to send along for dinner to show off his creations to the female diners – the ocean-liner inspired décor still has a touch of romantic nostalgia and the Parisians are just as chic as in the days of Dior. The menu boasts a surprisingly large selection of fish and seafood for Paris, all excellently prepared, along with locally sourced meats and French classics such as steak tartare and duck foie gras. Patisserie chef Angelo Musa, who holds the reins of the hotel’s afternoon tea menu, also takes charge of the desserts – a pleasingly long list of gourmet creations with the Exotic fruit vacherin a particular delight. After dinner don’t miss a peek at the small “wall of fame” outside the restaurant, featuring some of the fabulous stars who have passed through its doors.

The next morning breakfast is a veritable feast, served up in the hotel’s grand dining room. Here the décor is a surprisingly smooth blend of the modern and the classic, with the sleek molded silver banquettes – inspired by the domes of a traditional silver serving tray – sitting comfortably underneath a gilded gold ceiling and glittering chandeliers, which staggeringly boast more than 10,000 Swarovski crystals. Guests can enjoy a basket brimming with viennoiseries and fresh breads, made every morning by the hotel’s own baker, as well as a selection of the usual breakfast fare such as jams, fruits, muesli and eggs as you like them. Although you are served more than you could ever eat, do not miss the sugary brioche studded with sweet fruit for a true taste of a Parisian petit dejeuner, or the decadent hot chocolate, with real melted chocolate served in front of you and mixed to perfection. Or, of course, you could just call down for room service and have all of this brought to you in the comfort of your cocoon, it is Valentine’s Day after all.