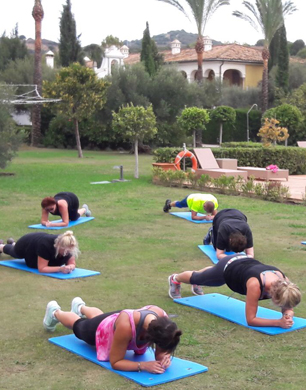 After the excesses of December you might have misplaced some pounds but gained some lbs on your tum! After all it is the season to be jolly, and eat drink and get merry at every opportunity!

But, when the time comes to start thinking about wearing normal clothes (as opposed to Christmas loungewear), it could just be that they are feeling mighty tight! Hence the ever so popular new year’s resolution to get trim.

I am always one of the latter, and admittedly had a pretty sociable festive time. So my body has been crying out for some TLC, And what better way to jump start your good intentions than by enrolling in a boot camp somewhere hot and luxurious?

So, I actually bit the bullet and joined 19 other gym bunnies (that is a slight exaggeration- some hadn’t seen the inside of a gym since high school!!) way back in September, but the camps run all year, and who wouldn’t want to have some physical fun in the sun when the rest of the UK is feeling pretty blue? So off to Malaga I went, with my dream beach body goals at the forefront of my mind!

Naturally, I came laden down with luggage. I had visions of long evening drinks by the pool wearing a selection of my favourite floaty dresses. On the other hand, some of my camp-buddies came ready to run a marathon with just hand luggage and their toiletries in the polystyrene bag for airport control! It turns out that these were the types that had done the camp before, and wouldn’t have been out of place at a wrestling competition- my inner glamour puss wilted somewhat quickly! However there were solo travellers, so I made sure I sat next to someone who looked equally as petrified on the minibus to the hotel.

Our home for the next week was a beautiful converted Monastery in deepest darkest Malaga; Quite a way from the airport and the beach, it’s courtyard setting, roaring log fire, and stunning swimming pool and remote location gave it an air of peacefulness. We were the only guests, which also made it feel a little bit like the Big Brother house!

Day one went by in a blur. We got our weigh-in and were measured. (I was remarkably ok with my weight! I’ve not been on a scales for years!) Then, we were introduced to the coaches- an ex Army and ex Air Force Training Instructor- one seeming much scarier than the other, given a run down of the weekly goals, provided a snack treat of apple slices with tahini, and then were sent packing to bed! However, the first class started at 7am the next day…

With five full days of intense exercise, I thought the challenge would be good for me- I could cope as I had lots of energy! My target was to tone rather than dropping pounds- but that would be a bonus. New You Bootcamp is based on military training, and even though both trainers had a different approach, we covered  HiiT, boxing, swimming, circuits and hiking classes each day, and I quickly learned that I liked some exercises better than others!

But I didn’t realise how hardcore, doing repeated classes would be! I threw everything into the first class on the first day- in retrospect, I should have built up to that! My calves hurt from jogging, my stomach ached from sit ups, and for the first two days I was ravenous! I wasn’t the only one as we compared notes during breaks and at meal times. The coaches, friendly and encouraging, reassured us that it was our bodies were adjusting, and the first two days would be the toughest.

Staring at 7am each day meant that the classes were interspersed with regular snack breaks, but without coffee, sugar, dairy, wheat or alcohol, it was an intense withdrawal from all my vices! I’m not sure what I missed the most- but herbal teas and hot water were readily available!

However, by day three, I had come round to this new way of eating. All of the food is included and prepared by an on site chef. Nothing is processed and all cooked from scratch. Dishes were mostly pulses, grains, vegetables and fish- the meat eaters had added meat! There was no salt for seasoning, but we could as many chilli flakes as we liked, which I even liberally sprinkled on my scrambled egg and rye toast. I didn’t miss the sweet things, but I was definitely craving cheese and dairy!

The friendly New Boot Camp nutritionist was on site for two evenings and held a couple of very interesting discussions on food, and what our body actually needs, which made the meal-times seem a lot more digestible! Even my salt-cravings could be traced back to me lacking in something, and I was advised to keep a food diary when I got home.

There is something to be said for working out in the sun. It’s inspiring, sweaty but it seems to be much more fun. The classes I enjoyed most were the team exercises where we scored points and played games.

The walks were pretty pleasant too- hiking through the beautiful Andalusian countryside at sunrise can’t be beaten. It’s best at dawn as the walk at the end of the day was pretty damn sweaty!

The week actually flew by in a whirl- the routines was remarkably easy to pick up, and getting back to reality and making decisions took some getting used to for the first few days when I got home! After all, for the duration of the camp, you are told what to do, what to eat and what time to be there. There isn’t the shouting or intimidation as you might expect- the instructors have toned it down from their conventional standards. But there is encouragement, and bit of banter.

The classes are mostly split up into pair work, although you do get the chance to do a triathlon!!  I never in my life thought I would be any good at endurance sports.. Swimming, core and jogging, three times round a circuit! But I did it, and that was one of the highlights of the week. Everyone went at their own pace, and we all finished. It wasn’t a competition, although there were the usual suspects who didn’t look back!

As a bonding experience, the camp is ideal. You can come as a single, couple or family (there was a mum and daughter at mine) and I could see the change in some of my camp-mates, and we all speculated on our weight loss. I chose not to look in a full length mirror until the final day- I wanted to surprise myself with my drastic transformation. Surprisingly (for me) I didn’t actually have a radical change. Infact I couldn’t actually see much difference- apart from my tummy which was more defined.

When weigh-out time came, I was curious, and for a good reason. I had only lost a kilo! I was a bit disappointed, but the trainers assured me that muscle weighs more and weight doesn’t matter- but those who did lose stones were very happy campers indeed!

My head did feel healthier, I had a cracking tan, and although I didn’t lose a dress size- to be honest, there was probably not one to lose.

Book in for 2018 at www.newyoubootcamp.com