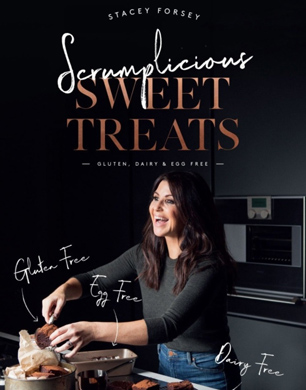 Stacey knows a thing or 2 (or 300) about gut health and the impact it has not only on your appearance but also on your mind and well-being too.

Having suffered for many years with, at times, debilitating stomach cramps, bloating, brain fog and lethargy, Stacey went on a journey of tests, doctors appointments and nutritionist visits to get to the root of her problems- which were finally discovered to be Candida in the large intestine (causing digestive issues, tiredness and fatigue due to poor absorption of nutrients via the gut), SIBO in the small intestine (this is when bacteria grows in the small intestine that is usually only found in other areas of the gut, causing pain and diarrhoea) and she was allergic, not just intolerant to certain foods too (not all intolerances are life-threatening). Stacey’s is clearly quite a cocktail of issues, but she discovered through her journey that so many of us are living with milder forms of these issues without even knowing it, and even greater was the number of people mis-diagnosed with and ‘putting up with’ IBS when in fact they often had one of these treatable conditions instead.

With help and determination, Stacey repaired her gut and was careful with which foods she ate, her stomach was flat again, the pain had gone, and the brain fog had lifted! She missed some treats, but she had accepted her situation and was relieved to have her health back.

However, when Stacey’s daughter was diagnosed with similar conditions, Stacey was adamant her daughter wasn’t going to miss out on the treats of life too!

Determined to create healthy treats that were not only tasty but had the texture and familiarity of the things she used to enjoy, Stacey got in her kitchen and experimented and experimented until she, and her daughter, were satisfied! Some task indeed! But she got there and has now made these recipes available to us all with her cookbook “Scrumplicious Sweet Treats” – and it really is one for everyone, not just allergy sufferers.

You won’t find all of the ingredients needed in your store cupboard (you may not have even heard of some of them) but they are well worth getting and learning about because not only are the recipes delicious (and absolutely taste and feel like the ‘real thing’) they allow us to enjoy treats without upsetting the gut bacteria, which thankfully we are all slowly beginning to understand and appreciate just how important it is to look after our digestive system; for beauty, brains and energy!

The recipes are easy to follow (just slightly longer to make, as I get used to the new ingredients) and so worth that bit of extra effort; guilt-free cakes with health benefits?? Total no-brainer!