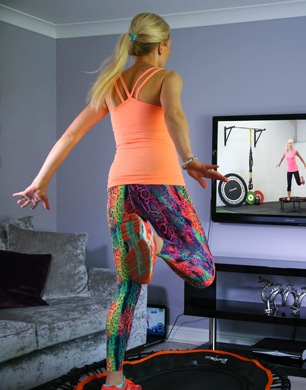 With only 2 months to go until the Royal Parks Half, I think I’d dare to say that my running is going well. It feels like less of a chore than it did even a few weeks ago and, while I’ve always felt pleased with myself once a run is under my belt, the time actually spent covering the distances seems far more effortless – occasionally, I even like to kid myself that I’m ones of those long-limbed creatures you see, the ones almost levitating along the pavements. Even the weekly “long” runs – these increase by one mile every week and I’m now up to nine of ‘em – feel positively marvellous, not just after, but during.

Here’s where I’ve not been so great though: the training schedule I’m on requires 4 days of running, one day of rest – and two days of cross training. I’m a bit rubbish when it comes to imprecise instructions. Tell me to run 4 miles and I’ll do it. Tell me to run 7 miles, and I might grizzle  and procrastinate a bit, but I’ll do it. Tell me to cross-train, and I’ll be full of worthy intentions, but will pore agonisingly over class timetables and be paralysed by choice and indecision.

Enter the Rebounder. As a mother of three, I wasn’t especially ready to embrace the idea of a mini-trampoline as one of the paving stones on my path to fitness – one, because I associate them too much with kid-friendly fun, and two, because I associate them too much with the less fun (and more awkward) aspects of having had the above-mentioned kids. If I cross my legs and look embarrassed, you’ll hopefully get the gist of what I mean. A weak bladder, if you don’t.

Still, worth a go, I figured. Low impact, check. High intensity, check. Compact and easy to store, check. Can be used at home, check, is not dependent on traffic, weather and public transport, check, can be used without watching cringey DVDs of reality TV stars ‘sharing their weight loss secrets’  while dressed in lycra, check. NASA approved … okay so I didn’t even know it was on my checklist but it sounds really impressive, so yeah, why not – check.

Also, bouncing in my own home, I figured, would have the benefit of privacy if any of the aforementioned ‘post-childbirth’ issues happened to strike. But then I read that Loose Women’s Nadia Sawalha claimed to have faced similar problems but, with rebounding, had managed to strengthen her pelvic floor – bouncing on an uneven surface challenges the deep core muscles, including the ones “down there” – enough to avoid similar mishaps in just five weeks.

At £9.99 per month, Bounce & Burn membership provides over 50 workouts from which I can choose depending on the desired intensity, with two new routines added each month, plus get-your-blood-pumping music downloads and sensible nutrition plans. Switching between workouts, I’m hitting up my entire body – especially worthwhile when it’s primarily my legs and bum that have been getting the bulk of my weekly running burn.

I’m pleased to report, too, that as my sessions – in which I’m said to be burning around 450 calories per 45 minutes – progress, my bladder is more than behaving itself. Unfortunately, my children seem to think that the Rebounder is there for their personal enjoyment and gymnastics practice which means that it’s not often at my disposal out of school hours, but oh how I wish I’d had one of these when they were all still teeny and I was struggling to get back into something vaguely resembling my pre-baby shape: this would have been the perfect at-home workout for when they were napping or even watching mama looking hilariously like an overgrown kangaroo.

So how does it work? Well, you know how the heavier you are, the more calories your body burns? Forget about springing wildly up and down with straight legs and trying to gain as much air under your feet as possible – by bending slightly forwards at the hip, pushing down through the balls of the feet , keeping your knees soft and rising no more than about 6 inches, you create a gravitational pull which, at the bottom of the bounce, makes your body up to 3.24 heavier than normal – sending your calorie burn through the roof.

According to James Winfield, Director and Master Trainer at ReboundUK, “Mixing dance choreography with explosive squats, twists, lunges, sprints, rebounding will change your body shape as it tones and tightens muscles and skin.  The constant change in gravitational pressure works every single cell in the body making rebounding the most effective total body workout ever.” And my joints, to which running isn’t especially kind, aren’t being further punished on my cross-training days. Winning.

Charity places for the Royal Parks Half Marathon presented by Royal Bank of Canada close on August 18th – for details, see the website