How To Choose a Truly Conflict-Free Engagement Ring 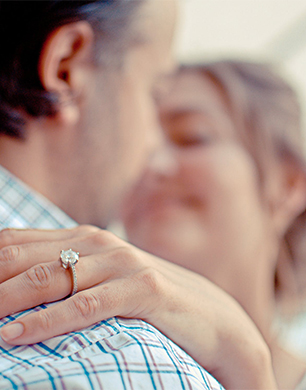 An engagement is a wonderful and joyous event for all couples and choosing an engagement ring is an exciting part of this! Whether you’re choosing one together, or you’re planning on surprising that special someone, ensuring your purchase is ethical and conflict-free should be top of your list of priorities. If you’re looking for a truly ethical engagement ring in London read on…

The History of Engagement Rings

Engagement rings have been around for many, many years, even as far back as ancient Roman times when they were worn as a symbolism of ownership; quite different to the romantic significance behind them today. During this period engagement rings were in no way as elegant or extravagant as they are in today’s culture.

Hundreds of years later, Victorian jewellers would combine a diamond with another gemstone like an emerald, sapphire, or ruby, along with precious metals. The end result was a colourfully-crafted ring, often in the shape of a flower.

Although diamond engagement rings have been worn for centuries by the wealthy class, the diamond only became a “must-have” addition to an engagement ring in 1938. It was during this time that an ad campaign for engagement rings was launched, coining the phrase “diamonds are forever”. The campaign was aimed at young men from all walks of life, not just high society, and it cleverly persuaded them that the size of a diamond on an engagement ring was a measure of a man’s love for a woman. The diamond grew in popularity, becoming a staple for an engagement ring; a trend that is still going strong more than 80 years later!

Since this time, jewellers have crafted numerous different styles, shapes, and sizes of diamond engagement rings, including the princess cut, brilliant round cut, and oval cut, to name just a few.

What Are Conflict Free Engagement Rings?

To learn the solution we must first understand the problem.

The 1990s and early 2000s saw wars in which hundreds of thousands of people were killed in the name of diamonds. This is where the term “conflict diamonds” comes from. Even when diamonds were not associated with wars, many were cut and polished in sweatshops, often by children working for exceptionally low wages. Places of conflict included  Angola, the Democratic Republic of the Congo (DRC), Liberia and Sierra Leone. Although much of the conflict has now ceased thanks to Kimberley Process, it has not stopped completely, and there are still conflict diamonds on the market today.

Conflict-free engagement rings are simply engagement rings that have been crafted by jewellers who have obtained their materials from ethical sources, and not those surrounded by war, conflict, and unfair working conditions. The ethical jeweller will use conflict-free, traceable diamonds and gemstones in their jewellery, along with Fairtrade gold.

In 2003, 52 separate governments made an attempt to end such conflicts by creating the “Kimberly Process Certification Scheme”(KPCS). They promoted, and continue to promote, the practice of sourcing and mining ethical, conflict-free diamonds. There are now 55 participants in the KPCS, who represent 82 countries around the world. The members have successfully halted the production of conflict diamonds by a massive 99.8% worldwide.

Although the KPCS has greatly improved the ethics of the diamond industry, having their certification is unfortunately not a guarantee that your diamonds have been ethically sourced and are free from conflict. Some have taken to smuggling diamonds to get the certification, creating confusion and uncertainty for those concerned about the practice of ethical mining.

To truly know that your diamonds are conflict-free, you also need to learn where they were mined. Your diamonds need to be both KPCS certified, and traceable.

As many African diamonds are not ethically sourced or traceable, the reputable jewellers like Ingle & Rhode in London use Canadian diamonds. Each one comes laser-engraved with a unique code, along with a matching certificate to show them precisely where they originated. This is an example of the ethical jeweller in action, taking great care to source their materials ethically.

Artisanal and small-scale gold miners notoriously work in poor and dangerous conditions, receiving incredibly low pay. Child labour is often used in many countries around the world. When gold is certified to Fairtrade standards, it means that it was mined ethically, and the miners’ working conditions and their wages were fair. These conditions are regulated by Fairtrade mining organisations around the world. They will certify their gold so that you can be sure it’s been ethically mined with it’s miners’ health and well-being in mind.

How To Identify An Ethical Jeweller

Now we’re aware of the problem, let’s discuss the solution.

Ingle & Rhode shows us a brilliant example of this by displaying all of its policies and information on their website. They thoughtfully incorporate information on the problem at hand, and clearly explain what they do to help eliminate it.

In an ideal world, finding an engagement ring that is conflict-free would be a simple task. Unfortunately, with so much disruption going on throughout the world, it can be difficult to determine the genuine ethical jewellers from the false ones. If everybody in the country stands firm and refuses to purchase conflict jewellery, we can all play a part in helping to better the situation.

Ingle & Rhode, London are specialist ethical jewellers who employ master craftsmen and women. They are renowned for creating truly exquisite engagement rings and wedding rings. Made in the UK, their bespoke engagement rings are conflict-free and only ever made with Fairtrade gold and traceable diamonds and gemstones. Browse their website for further information on their policies and standards, as well as their beautiful range of rings.