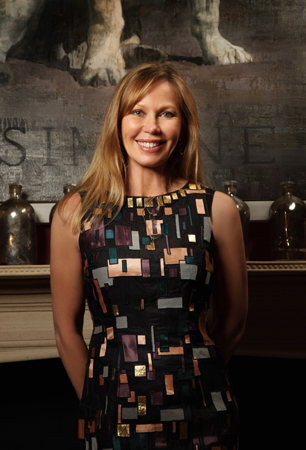 StyleNest caught up with one half of the global hotel group Firmdale Hotels, MBE and interiors guru Kit Kemp.

With over three decades worth of interiors industry experience, a global hotel empire that includes The Soho in London and the Crosby Street in New York, plus an MBE to boot – it’s safe to say Kit Kemp is one of Britain’s most successful career women.

Kit has become known for her carefree and colourful approach to design, and her knack for taking a dilapidated building, be it an old car park or a rundown warehouse and transforming it into something luxurious and beautiful.

We caught up with Kit to talk about everything from design to dinner parties, and take a sneak peak inside her life.

You’re Design Director for Firmdale Hotels, which you also co-own with your husband Tim. Tell us a little about your role.

Our two latest projects, Ham Yard Hotel in Soho, London, and a new hotel on 56th Street, New York are both new builds so my job is to first envisage all the needs and requirements of a hotel and after that create the style, feel and colour. It is always a bit frightening at first until the idea is under your belt – I never count sheep when I try to go to sleep, I just walk through the corridors of the hotels in my mind.

The Firmdale group includes top London hotels such as The Soho and Charlotte Street. How do you decide the design process for each one?

Every hotel should stand on its own merits, and not feel part of a formula or a group. It has to last for many years, and work from a practical point of view. After achieving the practicalities, it is the design and imagination that goes into a project that is the fun part and there is never a lack of ideas. In fact too many ideas can be a liability and the look can become too tricky.

Have you always wanted to work in design?

Design has always wanted to work with me; whatever I did it always came back to it. Nevertheless design should always look colourful and carefree.

You’re renowned for taking dilapidated buildings and completely transforming them into five star hotels. Where do you think you get that ‘eye’ from?

A large space or building like a hotel can hold an entire street or area together. My ‘eye’ comes from life but it means nothing without people wanting to use a space and love it.

You’ve won numerous awards throughout your career but in 2012 you were honoured with an MBE. Tell us how you felt on the day?

I was accompanied on the day by my husband, daughters and one of my brothers, and our family group photograph shows a very colourful band of folk dressed up in finery and hats. One person came up to us and said “Well, you are certainly the most colourful family here.” I spoke with many of the other people collecting awards on that day and felt they were far more deserving than we were.  It was a very humbling experience.

Out of the hotels you own and design, could you possibly choose a favourite?

No, it is like asking which is your favourite child. There is something in each which is quite distinctive and holds its own.

What interiors trends should we be looking out for this year?

Indigo will be everywhere, as will interesting sculptural lighting, and an over all air of elegance.

Do you have any top tips on how to transform your living space without much time or money investment?

Fabric line a wall to achieve a more tailored finish or to add texture to a room, and make lampshades from silks in a range of colours for an instant update.

What are your favourite home wear and interiors brands?

I love Anthropologie and I am working on a capsule collection for them at the moment. I also like boiled wools from Holland and Sherry and block prints from Galbraith and Paul.

You also own the Crosby Street Hotel in New York. Where do you like to eat, shop, see and drink in the city?

Apart from Crosby Street Hotel of course, I eat at the deli Dean and Deluca in SoHo and also at Balthazar Restaurant just around the corner. For clothes I like Club Monaco, J Crew and Catherine Malandrino. And in terms of things to see, I love to visit the Neue Galerie, the Highline and the Museum of Mankind.

Do you have any secret London hotspots you like to frequent that you can share with us?

I like going to Somerset House to see the exhibitions there, and we are just in the process of doing a room there for Wool House. It is a room tailored and designed by us featuring especially designed pieces by Anna Raymond, Pippa Caley and African Dhahabu, and my fabrics from Christopher Farr among others.

What’s next for the Firmdale group?

The New York hotel should be complete by 2018, that’s far enough ahead for me to think about.

You’re a successful career woman and must have a hectic schedule. How do you relax?

I ride Lontaire a Dutch Warmblood who thinks he is a New Forest pony. I like being outside and walking the dogs in a bit of greenery too.