Charlie And The Chocolate Factory Musical To Hit The West End 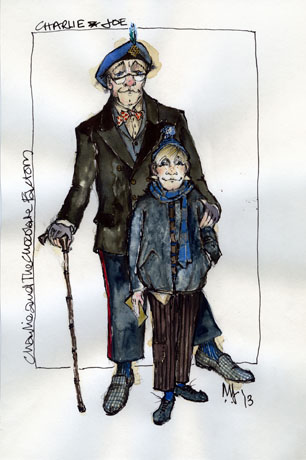 Illustration by Charlie and the Chocolate Factory set and costume designer, Mark Thompson.

After the huge success of Matilda the Musical, another of Roald Dahl’s classics is set to hit the West End this summer. So grab your golden tickets, as one of Dahl’s most popular stories, Charlie and the Chocolate Factory gets the musical makeover.

Destined to be the stage success of the summer, Charlie and the Chocolate Factory is being produced by none other than the Warner Brothers Company. Academy Award warding winning and James Bond director, Sam Mendes has been brought in to direct the masterpiece, which has already been three years in the making and two years designing and creating the sets.

The musical will open at London’s Theatre Royal Drury Lane on 25 June 2013, with Olivier and Tony Award winning actor Douglas Hodge doning the famous purple coat to play Willy Wonka. With music by Marc Shalman and Scott Wittman, costume design by Mark Thompson and of course Sam Mendes on board, the musical will bring together huge talents from across the arts.

If you saw the film the first time round, re-read the book over and over again as a child, or want to introduce your own little one to the magical story, the Charlie and the Chocolate Factory musical is a must-see of 2013. So, grab your very own little Veruca Salt, Violet Beauregarde or Augustus Gloop and treat them to what is sure to be the West End’s biggest hits this summer.

Tickets are on sale now with prices starting at £25. Performances start June 2013, with previews from 18 May, so get your golden tickets before they sell out.