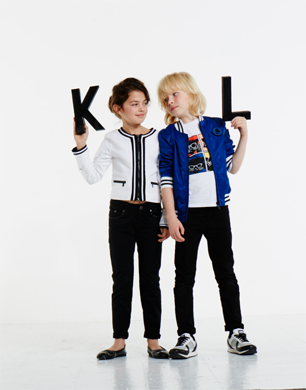 The iconic designer’s very first children’s line will be available at the largest online retailer for children’s designer fashion- Childrensalon.

It was only really a matter of time before the creative director of Chanel decided to branch out into the kids wear arena. The designer is credited as being one of the most accomplished influencers in fashion and following in the ready-to-wear footsteps of its parent label, the KARL LAGERFELD Kids collection reflects the designer’s own identity.

The collection features 140 designs, 75 styles for girls (2 – 16 years), 50 for boys (2 – 16 years) and a capsule collection of about fifteen styles for babies. All emulate the designer’s creative and cutting edge approach to style and you can expect a fresh, modern and easy-to-wear selection.

So what is kids fashion according to Karl Lagerfeld? Well true to his signature style, monochrome dominates the collection together with primary colours such as: cobalt blue, paprika red and lemon yellow. The theme of the collection is a fusion of ‘rock’n’roll’ and ‘modern-chic’ to create what the designer calls ‘rock-chic’.

The overall look includes a blend of child-like fabrics and playful illustrations with Karl’s furry feline ‘Choupette’ and her fictional friend ‘Bad Cat’ charmingly chronicled throughout. Their lovable whiskers and sweet little ears appear on clothing, shoes, and accessories.

Expect to see hints of the designer throughout, with mini-me versions of his most recognisable pieces. We adore the elegant ivory, tweed effect jacket (very Chanel!) for girls and cool graphic silhouettes and logos for boys. This is definitely an ironic and playful collection and one which mini fashionista’s (and their parents) are bound to embrace.

KARL LAGERFELD Kids will be available online at Childrensalon from 5th of December 2015.