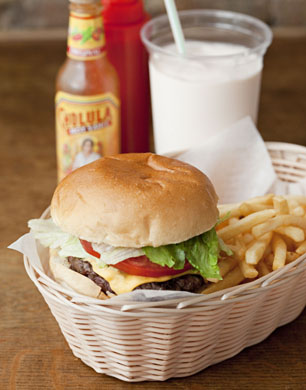 StyleNest were very excited to hear that a new burger restaurant had come to town. Of course we just had to try and it and with great anticipation, StyleNest are pleased to say Tommi’s Burger Joint did not disappoint.

Inspired by the speakeasy New York favourite Burger Joint, Icelandic entrepreneur and burger connoisseur, Tomas Tómasson has launched his latest venture, Tommi’s Burger Joint. With over 30 years of experience, such as launching Iceland’s first Hard Rock and running hotels, Tómasson decided to travel the world and on his return the first Tommi’s Burger Joint was born in Reykjavik in April 2004. Following, a succession of four more Tommi’s Burger Joint’s launched across the country and now in the heart of Marylebone.

Located just off the charming Marylebone high street and moments away from London’s bustling Oxford street, Tommi’s Burger Joint offers an American-style diner with an urban vintage edge. In true diner style, complimentary coffee is on offer and a handwritten sign above the bin “Dump your Junk” adds a truly original touch. Intimate and casual, the burger joint has a relaxed feel with exposed brickwork and American memorabilia and movie posters adorning the walls. Above the grill, an amalgamation of handwritten cardboard signs form the simplistic menu option with five burger options.

The menu offers a burger (£5.30), cheese burger (£5.80), veggie burger (£5.30), steak burger (£7.95) and steak burger with cheese and béarnaise (£8.95). StyleNest sampled the classic cheeseburger, fries and soda for £9.40 and with no cutlery in sight, we were forced to eat this properly. Unlike most burgers, which are stacked too the bun brim, you are forced to eat it with a knife and fork, the Tommi’s burger you can eat quite comfortably barehanded and its fun! With fresh iceberg lettuce, tomatoes, chopped onion, gooey cheese and succulent buttery mince all coated in Tommi’s special cocktail sauce, StyleNest can confirm this is a 5* burger worth sinking your teeth into again. All burgers are cooked on an American gas grill and you can taste the charcoal flavour through the tender beef which adds to the authentic flavour.

Click here for more restaurant reviews around London and the UK.