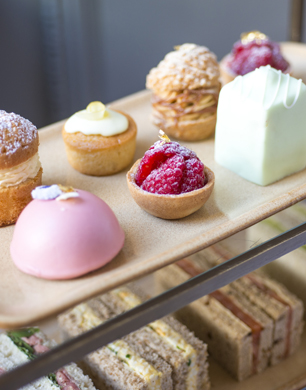 I’ve always been a lover of crustless cucumber sandwiches and scones with clotted cream but even after being an avid Afternoon Tea goer for many years, I still had no idea where this custom came from?

In 1840, it was routine to take two meals a day, breakfast and dinner. The 7th Duchess of Bedford, Anna introduced Afternoon tea in England after she asked for a tray of tea and cakes to be brought to her room. This was a ritual she made regular and then began inviting friends to join her and soon other gentry  too started practising tea. Before long, nobility and the fashionable elite were all taking tea and nibbling sandwiches in the middle of the afternoon.

Now that we’ve got the history part down, let’s get to the tasty part. For Afternoon Tea connoisseurs, you’ll know there’s Wizard themed teas, Alice And Wonderland themed teas, teas for gents and also teas where you’ll feel like you’re eating in the clouds. But the beautiful thing about the Afternoon Tea at Thomas’s Café in Burberry is its effortless style. Priced at £32, the tea includes unlimited pots of 2016 2nd Flush Grand Reserve Darjeeling India, a glass of Nyetimber classic, and an assortment of dainty finger sandwiches with fillings of traditional cucumber, egg mayonnaise and delicate beef with horseradish. Followed by Miniature British favourite finger cakes, including Victoria sponge cake and lemon meringue tartlet, are served alongside Thomas’s signature pale orange fondant fancy and walnut whip. We also had a selection of Tea Cakes, Crumpets and Scones to choose from to complete our Afternoon Tea feast.

And of course, everyone needs to get in a few extra steps after indulging in an afternoon tea. The Burberry Flagship store at Regent Street is the perfect place to help you indulge in some retail therapy and perusing the new AW/18 trends…who says trying on clothes isn’t cardio?

Afternoon Tea is priced at £32, to book click here