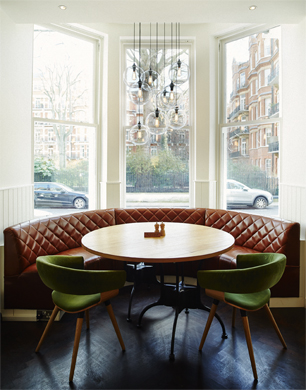 Theo Randall, the man behind Theo’s Simple Italian restaurant in Earls Court, previously cheffed at The River Cafe and came to love Italian food during frequent and indulgent family holidays to Italy. As an long-time admirer of The River Cafe and a lover of Italian food, I booked myself a table and invited an equally enthusiastic friend.

The restaurant itself is within the Hotel Indigo and although they have their own entrance, there is still a faintly corporate atmosphere upon arrival. The interior design works hard to counteract this, with soft leather furnishing and statement pendant lighting. After a warm welcome, the maître d’ showed us to our window table which was in a separate, rather quieter room. A well meaning gesture but we did miss the atmosphere of the main restaurant area.

The waiting staff were very knowledgeable and eager to share; recommending dishes and explaining the origin of the ingredients. We started with the burrata with winter tomatoes and as usual it didn’t disappoint. The burrata was perfectly creamy and the tomatoes lent a sharper edge to the dish. Even the simple olive oil dressing was remarkable.

As my guest was a pescatarian, we wanted to try a few of the various fish dishes on the menu, a larger and more comprehensive selection than the meat dishes on offer. As red wine drinkers, we were helpfully recommended a Sardinian red that would be light enough to compliment the fish. Our second primi of choice was the linguine with clams, artichokes and bottarga. Having admitted our ignorance, we were explained that bottarga is salted fish roe; much more delicious than it sounds. The linguine was perfectly cooked and another reminder that true Italian pasta is decidedly al dente. The texture of the clams and the artichokes worked perfectly with the pasta, but we were struck by how salty the dish was.

We then moved to the main course, for which we ordered the fish stew with red mullet, prawns, squid and crostini. We were advised that one portion between the two of us would be enough, due to the richness of the stew. It proved good advice as we did find the lobster bisque very rich and it rather distracted from the flavours of fish itself. The sweet crostini was divisive but we agreed that the prawns and red mullet were very fresh beautifully cooked. This was the only dish we failed to finish, defeated by its richness.

There was, however, definitely room for dessert. We ordered the  signature lemon tart and the chocolate and orange tart. Both of these were delicious, with flawless pastry bases. The lemon tart was the favourite (no wonder it has the prefix ‘signature’) and had the perfect sharpness to follow our fish stew. The chocolate tart had the slightest hint of orange; very well balanced flavours. After a refreshing glass of Limoncello suggested by our waitress we rolled out, resisting the temptation order another tart ‘to go’.