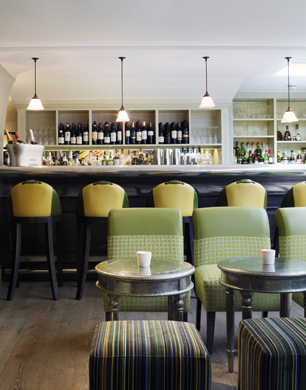 Kit Kemp’s hotels and restaurants have taken London by storm. We love them. The Potting Shed is a charming little restaurant and bar at the Dorset Square Hotel, the very first in Kemp’s collection.

Dorset Square is an attractive garden square tucked conveniently behind Baker Street in Marylebone. It is also where renowned hotelier and designer Kit Kemp converted one of the regency townhouses into her first hotel in 1985. Subsequently the property was sold, but bought back in 2012 and refitted in signature Kemp eccentricity. The Potting Shed is the hotel’s stylish, garden-themed, basement restaurant and bar, which serves food from breakfast through to supper.

The bar features low pouf, stool, and armchair seating, alcoves, and a large garden table for communal cocktail drinking. The space is warm and feels too quaint to be in a London Hotel, lending itself well as a first date location or for one-on-one catch ups. The restaurant is on the other side of a dividing wall, and is similarly intimate.

An informal mix of mainly British dishes dominates the menu, with a little international influence. Lobster ravioli with curried veloute was a strong start to the meal, the curried sauce restrained enough not to overpower the shellfish. We also enjoyed a subtly spiced lamb croquette with delicious caramelised cauliflower puree.

Following this were plates of Atlantic cod and pan roasted partridge. Soft, flaky cod came with crispy squid and spiced cabbage. The cabbage was remarkably good, with flavour reminiscent of the Thai speciality Som Tam. Braised endive, suede, and walnuts accompanied the partridge in attractive flourishes on the plate. The dish had rich, well developed flavour, and while the meat was not overcooked it could have been taken off the heat two or three minutes earlier.

Caramelised apple soufflé with malted-milk ice cream was irresistible. Prepared to order in the kitchen, when it arrived at our table a waiter carried out the now ubiquitous dolloping-of-ice-cream-into-soufflé-hole ritual that I first encountered when eating Koffman’s famous Pistachio Soufflé some years back. Malted ice-cream, the most comforting of all ice-creams, had the soothing flavours of Horlicks, Malteasers, and those malt biscuits we dipped in milk as children. It was a fittingly cosy end to a meal at this very cosy restaurant.

Marylebone can be tricky for picking restaurants in – there’s a lot of chain rubbish around Baker Street. If you’re in the area, The Potting Shed is a sound choice from one of London’s favourite hospitality mavens.