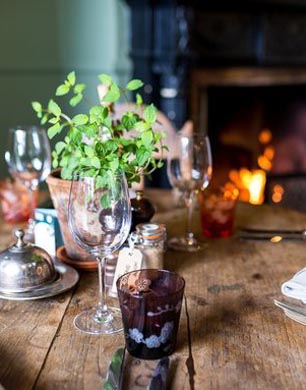 But after a shifty espresso, I gained momentum in the glee stakes, and began to relax on my day trip to Brockenhurst. Leaving the grey skies and dismal weather in itself was a treat, and the fact I was heading to Dorset to experience the fine dining and expert hospitality at The Pig Hotel, I was getting perkier by the minute- the coffees potentially helped!

The reputation of The Pig meant that it was just as known for its idyllic setting in 17th Century New Forest National Park, as it’s country garden. After doing a little bit more sniffing around, I was thrilled to hear that they used as much produce on their menu from their own country garden, and seafood, oysters, deer, honey and cheese was as much as possible from suppliers within a 25 mile radius.

This New Forest Hotel is a real hidden gem. Tucked away in sleepy Brockenhurst, it’s only two hours by train from London. It is boutique in every sense of the word and luxuriously snug.  The restaurant menu that is open for non-residents too is as long as your arm and changes daily to the Chef’s flight of fancy. But what a chef- James Golding really knows his onions, and is not afraid to experiment.

As you might expect, the restaurant is renowned for it’s pork offerings. With a starting platter of Scotch eggs, sausage rolls, crunchy crackling and a side of bread, I knew that I would be putting a few extra hours in the gym this week.

Spoilt for choice of mains, my party eventually, after much deliberation chose Hampshire lambs liver, 10 oz Ockley Farm Sirloin and Beaulieu pheasant breast, whereas I plumped for the whole dressed Lymington crab, so we could get the full spectrum of menu, and as this is one of my faves, I was keen to see how a crab and chips would be served… I was not disappointed. My crab had been shredded and dressed and presented in its shell. The meat was oozing with flavour, and the thrice-cooked chips were the perfect accompaniment- almost too much for lunch! But I battled on! Perhaps fuelled by The Pig’s home produced wine, which was crisp and fruity and worked wonders with the three courses. Yup, we ended our feast with a selection of deserts including charred garden pears, Nan’s vanilla baked rice pudding and dark chocolate and garden thyme mousse with roasted white chocolate- it seemed not to as it was such a miserable day.

With the log fire crackling away in the background and the rain crashing down on the windows, The Pig parlor was the only place I wanted to be. The shabby chic surroundings were so welcoming, and endless cubby holes, sink into sofas, and cozy nooks made it easy to fantasize about curling up your feet, drinking some red wine and reading that book that has been in the bottom of your bag for ages!

Alas I had work to do so this fantasy had to be postponed and I braved the weathers to check out the accommodation for future visits. Already booked up for Christmas (I can just imagine what a feast that will be!) The rooms range from the snug, which is snug and cute, to the comfy luxe which is a slightly larger version of the snug, with a four poster bed, right through to a family Pig House, which has a master bedroom, piglets room, spacious lounge and kitchen area.

With plenty to do in Brockenhurst and surrounding areas, you can hire bikes, borrow wellies, or go foraging with the Hotel’s own Foraging King, Garry! And then come back, unwind and enjoy the beautiful scenery from the bar or your room. There’s more to the New Forest than wild horses! And a bit of exercise after all that delicious food is the perfect combination!

For more information, check out www.thepighotel.co.uk