The Orangery at Kensington Palace 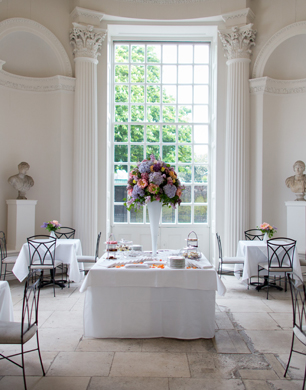 StyleNest soaked up the elegant surroundings of The Orangery, for breakfast on one sunny Sunday morning in October.

The Orangery at Kensington Palace has one of the grandest settings to enjoy day time dining in London – not surprising when considering its rich history. Built in 1704, it originally served as the greenhouse of Queen Anne; she also used it for her lavish court functions and as her summer supper house. The building echoes many of the timeless features of the architectural style that bears her name, creating a graceful and opulent space to while away an hour or two.

We visited on a crisp but bright morning in early October, the kind of day that calls out for coats and sunglasses. Shown to our table in the long, narrow, and perfectly white room, The Orangery reveals itself to be the kind of chic place that one arranges breakfast, lunch, or tea to catch up with friends and share a few gossipy stories from the week that past.

The breakfast menu had many options, and we tried a selection including fruit salad, and berries with granola and yoghurt, both were great with the fruit being surprisingly ripe. Following this we had plates of the Eggs Benedict, and of course the Full English Breakfast. Again, the quality of the food was very good – the eggs were perfectly cooked, and the bacon and sausages were really rather delicious. We washed this all down with some great coffees, and incidentally to those who avoid dairy, they do a very acceptable soya latte.

The Orangery has more than café style food though, serving  a menu of seasonal British fare at lunch time including dishes such as guinea fowl in truffle jus with roasted garlic and baby carrots, and short rib of beef with bone marrow. Beyond Lunch, the Afternoon Tea offering is hugely popular – they churn out almost two thousand of them a week. Priced at a very reasonable £26 (Gluten free version available), with the option of upgrading to a champagne afternoon tea for £36.

With its magnificent 18th century interiors and stunning location, The Orangery is a perfect pick when wondering where to head in the Royal Borough.