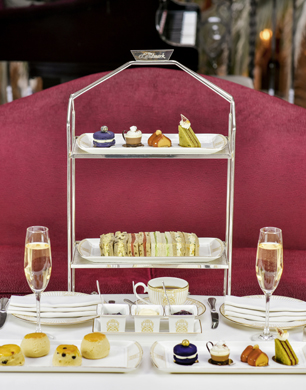 The tradition of afternoon tea arose, it is said, in the mid-19th century, thanks to the seventh Duchess of Bedford who, being forced to wait until the vogueishly late hour of 8pm for her evening meal, started asking for an afternoon repast. Over time, the idea gained in popularity and became an opportunity for dressing up and gossiping.

This instigator’s name was Anna and she deserves, I don’t know, an extra big meringue or something. Without her and her unabashed acknowledgement of her afternoon slump and attendant carb cravings, the tradition may have come about via someone from the present day, which would have entailed a trip to an office vending machine for a Mars Bar.

I’m not entirely sure that the glossy young ladies of the 22nd century would have been celebrating anyone for that.

So this Anna the Duchess was one our own kind: fond of a cake and open to an excuse for getting together in frockery and fun. Problem is that she was so savvy about ‘what works’ in those hours betwixt lunch and dinner that her genius has been seized upon and replicated and improved upon and accessorised with gorgeous china and ever-more exquisite delicacies.

In short, a good afternoon tea can be taken pretty much everywhere. How to make it stand out?

The Landmark London has an immediate head start in this regard simply because its setting is so ridiculously gorgeous. If you come here by train, the old world majesty of nearby Marylebone will give you your first inklings of the splendour that awaits: originally opened in 1899 as a Victorian railway hotel and named the Grand Central Hotel, The Landmark London is now a Grade II listed building.

Enormous floral displays in a soothingly dim-lit foyer ease you into a moment of decompression as you exit the bustle of London, before you’re swept up a short set of stairs to emerge into the dazzling light of the Winter Garden.

This central atrium’s neck-craningly lovely 8-storey high glass ceiling is as incredible as it is impossible to do justice to in a from-ground-level photo (I’m pretty sure that the endlessly-selfie-taking girls at the table beside us were dismayed by their lack of levitational prowess. Now THAT would’ve been worth posting)

But the glass ceiling is just an invisible barrier – to career advancement, certainly, but just as feasibly shattered in the quest for the perfect Insta. There are sweeping staircases, soaring palms, the aforementioned floral displays and the central table, groaning under the weight of comestibles. And that’s before you even make it to the luxe loos. If you’re here for selfie-taking, there’s no end of backdrops against which to pose. 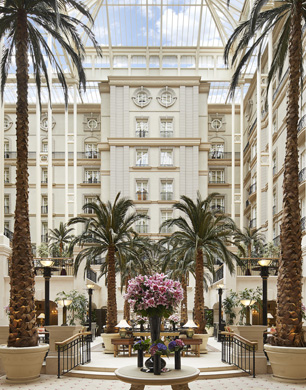 Having said that, if all you’re here for is the perfect Insta then you really are missing a trick because the afternoon tea is well worth abandoning your pout for – although if you can pout with a mouth crammed full of Coronation chicken on walnut bread, then fair play to you.

This sandwich, along with others of cucumber, egg mayonnaise and cress and Lapsang Souchong smoked salmon, is just the start of it. Waiters swoop elegantly around with trays on which each variety is neatly lined up, replenishing supplies for those who want them. We do, no question – they’re delicious and the bread is sublime – firm and yielding to the bite. There’s a wonderful selection of teas – try the Landmark Blend, which melds Assam and Ceylon with a hint of vanilla – although we linger over a glass of sparklingly cold glass of pink champagne first.

Sandwiches scoffed, the menu diverges into a choice between a classic afternoon tea and a chocolate-focused one; where the scones are concerned, this is a difference between raisin and apple or chocolate chip and fruit peel. Delicious as they both are, they fade a little in the dazzle of the jam menu, which sees us oohing and ahhing over the impossibility of choosing between Bergeron Apricot, Blackcurrant, Cherry, Strawberry and Gooseberry and Elderflower.

Tip: the gooseberry and elderflower. Is. Everything.

And then on to the cakes, at which point we regret, somewhat, our eagerness over the sandwiches – a classic ‘eyes bigger than stomach’ error. Fortunately, they’re so ludicrously pretty that we’re able to buy some time before launching into them by arranging them in various configurations and taking photos of them. The gooseberry and elderflower combination comes up trumps again; combined with lemon in a meringue tart, it’s the undisputed star of the classic tea, while over on the chocolate side of the table, raptures are had over a blood orange and white chocolate mousse.

The setting, in its more diminutive sense, rates a mention too: impeccable white table cloth, delicate china with an intricate pattern of white on gold, a tiered silver tea tray beside each table and the bright addition of a gerbera head in a glass adding a subtle pop of colour – no fussy arrangements to detract from the overall air of elegant simplicity.The staff, too, are incredibly attentive – although perhaps not quite as conducive to meaty gossip as the intimate gatherings of the Duchess of Bedford’s might have been, so frequently do they appear at our sides. In any case, any small twinges – a bit too scant for our liking on the clotted cream for the scones, for example – are dealt with so swiftly that they scarcely even seemed to happen.  And all the while, the rippling chords of the resident harpist are flowing like an enchantment in the background. Even when we finally admitted defeat in the face of the pastries, we were in absolutely no hurry to leave; it’s almost impossible to believe that there’s a vast, sprawling, busy London just beyond this oasis of calm (and cake!) and plenty.