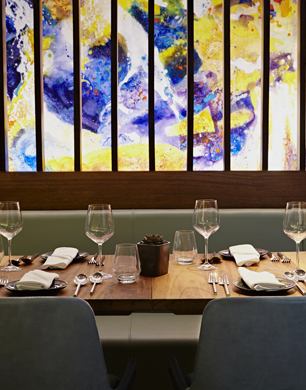 During its twenty five years in business, Patara has carved itself a position as London’s premier destinations for fine quality Thai food. Since Nahm closed down at The Halkin and was replaced by Spanish restaurant Ametsa, the Patara group has had little serious competition for its crown. This appears not to have had it resting on its laurels though; the group has just opened a new London flagship restaurant on Berners Street which sets out to raise Patara’s game to the next level.

Located next door to the glamorous London Edition Hotel, the restaurant occupies an enviable spot in the heart of W1 just a stone’s throw from theatreland and the shops of Oxford Street. Although Patara is a group of restaurants, this outpost feels like a one off. Designed by the people behind Chotto Matte, Barrafina, and Quo Vadis, it’s a sultry and enticing space with fabulous lighting and table set up; a definite date night possibility.

Patara wanted to do something different with the Berners Street branch to set it apart from its sister restaurants, and thus it has its own menu with a mix of old favourites and innovative new dishes. Patara describes itself as “authentically different”, so although some of the dishes here won’t be found on a typical Thai menu in the UK, the cooking is all rooted in familiar Thai flavour palettes and cooking techniques.  One of the specially created starters is Chor Muang which consisted of perfectly tiny, purple coloured, flower shaped dumplings filled with caramelised chicken and sweet turnip – they were exquisite. We chose Lamb Shank Massaman and Curried Black Cod as our main courses. The word Massaman is roughly translated as a Muslim from Thai, and this particular dish is noted for its smoky richness – nothing like the light aromatic flavours Thai food is usually associated with. The lamb shank here was beautifully tender and paired perfectly with the massaman curry sauce. The cod was again a fantastic dish, wrapped in banana leaves and then cooked with red curry and kaffir lime. The dish was finished off with a pumpkin puree and was the winner of the night – in my opinion better even than the Miso cod at Nobu. Side dishes consisted of a collection of rice and vegetables but nowhere could we see mention of Som Tam. If this side dish is your favourite (a spicy green papaya salad, and one of Thailand’s national dishes), ask for it – they can whip up a fantastic one.

We finished our meal with another national dish – Khao Niao Mamuang (Sweet coconut sticky rice with mango). Here the mangos are flown in weekly from Thailand – boy was it worth it.

The Berners Street branch of Patara offers an authentic, high quality interpretation of Thai cuisine. Think of it as Thai food made luxe. In my experience – perhaps I’m fussy having grown up with a half Thai mother – Thai restaurants can be quite underwhelming. No such risk here, Patara will feed you well.