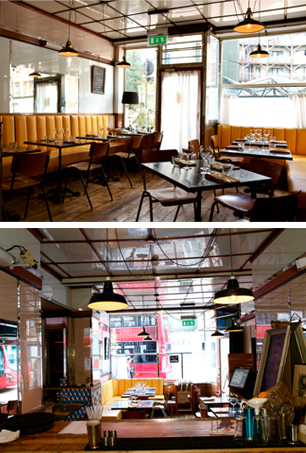 From Meat Liquor to Burger & Lobster – meat is back on the menu in the capital and it looks set to stay. Joining the mob of restaurants that specialise in just one thing, be it hotdogs, burgers or steaks, Meat People offers a more affordable approach to man-grub than some of its pricier counterparts.

Located on Islington’s Essex Road, the Meat People building is full of foodie nostalgia. N1 residents may remember it as the classic ‘S&M’ sausage and mash café or as the café in cult Mod film, Quadrophenia.

Inside the Grade-II listed building you’ll find a warm, relaxed atmosphere. Low lit lighting, wood paneling and a tiled ceiling are paired with a soundtrack of jazz, whilst retro 50s food ads adorn the walls. There’s a definite old school vibe about Meat People and with a menu of steaks paired with classic cocktails, it’s the type of place you’d expect Don Draper to pop in for a quick lunch.

The menu as you’d expect consists mainly of meat, although there are some lighter grilled fish options if you’re that way inclined. A word of warning though, vegetarians should probably steer clear; Meat People is definitely a place for self-confessed carnivores.

Starters range from simple grilled asparagus to tender beef carpaccio. We sampled the MP caesar salad, which was given a tangy twist with fresh grapefruit, and the salt and pepper squid, which was fresh and moreish.

For main we went for the Meat People Platter – a board of juicy cuts to share for two including the traditional ribeye, the rich marbled onglet and the tender iberico. Altogether, the platter weighs in at a mammoth 700g worth of meat- plenty if not a little too much to share between two, but priced at a rather reasonable £42. Add to that, sides of handcut chips and fried chili courgettes and we were definitely stuffed, but satisfied nonetheless.

Although the concept is simple, the food is cooked perfectly by Head Chef Nicolas Buyo and is definitely influenced by his Argentinian roots.

The steaks are paired with cocktails at Meat People – an unusual choice but one we happily welcomed. Priced at £8.50 a pop, tipples range from the sweet rose petal martini to the more steak-pairing-worthy old fashioned. There’s also a good range of world wines and London ales on the drinks menu.

After years of being told to eat more greens, it seems London’s current obsession with meat has thrown that concept out the window. We’re sticking with the trend for now and will definitely be returning to Meat People soon.