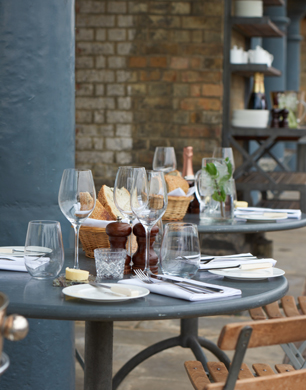 A sunny Friday night a couple of week’s ago, my partner and I trotted (well, cycled) across London Bridge in search of dinner on the South Bank. Nestled into a row of waterfront eateries is Butlers Wharf Chop House, an all-day brasserie with a wildly nautical feel, separate bar area, modern British menu, and stunning views of the city, lying in the shadow of Tower Bridge.

We arrive early so took the opportunity to take a seat at the bar, savouring the fruity and floral gin cocktails the mixologist recommends for us. Sometimes it’s good to let someone else make the decision for you. After all, you can’t do many bad things with gin.

The restaurant is buzzing; round tables were seated with lively families, smaller ones with business diners, trios of tourists, and later on, the space grows increasingly coupley as Friday night dates arrive.

We take a little table right by the window where we score an impressive view of Tower Bridge in all its glory.

We stick to gin instead of wine (though the wine list is impressively lengthy), ordering two Hendricks G&Ts, which arrived in goblets larger than my head, to be savoured whilst perusing the extensive a la carte menu.

What with being a chop house, there’s no surprise that meat dominates the menu, and there’s a whole section on the menu on steak. Seafood is also well represented — in keeping with the nautical decor and waterside location — with oysters, shellfish, classic fish and chips and so on.

My partner can’t see a prawn cocktail on the menu without ordering it so he opts with that, whilst I toss up between the crab on toast and the the potted Morecambe Bay shrimps, eventually siding with the latter, which are densely packed in a Kilner clip top pot and served with crisp, light bread. Knowingly indulgent, they’re rich and salty-buttery in flavour. Portion sizes even for starters are large, so we take time ordering our mains.

The boy decides on the Sirloin and the waiter strongly recommends he gets the bone-in version, which is much fuller in flavour, all 500 grams of it. Given the nautical nature of the restaurant — and the fact that I don’t eat steak — I feel somewhat obliged to get seafood so opt for my favourite, lobster — just half much to the waiter’s opposition. I pride my ability to eat a lot but a whole lobster isn’t going to fit in me. We balance the protein out with triple cooked chips and spring greens instead.

The Sirloin steak is of size and as the waiter promised, bursting with flavour. My partner comments its the best steak he’s ever had and though he has said that at a couple of places recently, I take it it’s good — he demolishes it right to the bone. I get messy making my way through the lobster, which is fresh and meaty, and with a rich garlicky butter that doubles up as an indulgent dip for the dunkable triple-cooked spuds. The spring greens make the table feel slightly healthier, though I’d argue probably aren’t quite so given how delicious they taste.

The dessert menu is delicious, with options as Eton Mess, Chocolate and Gingerbread Cheesecake, Sparkling Fruit Jelly, and our favoured option, Summer Pudding served with Clotted Cream — two spoons and all. It arrived, rich in colour and wonderfully soaked in berry juices. Sweet, zingy and delicious, it was the perfect dessert for the balmy summer’s evening, and one that won’t weigh you down for the rest of the week.

Thanks to Butlers Wharf’s impressive views coupled with great food, it’s the perfect place to take out of town visitors who’ll be wowed by the location, as well as partners and husbands,