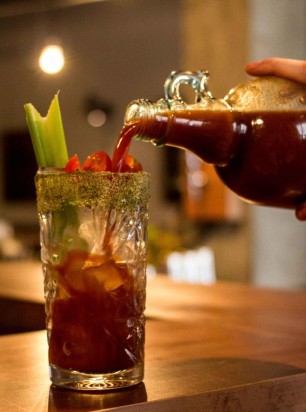 Beard To Tail is London’s latest hip, meat centred restaurant and bar. Appealing to StyleNest’s borderline obsession with all things meaty, we went along to try it out.

StyleNest have been following Beard To Tail’s progress for months over various social media channels and were extremely excited to try it for ourselves. This bar and grill is brought to us from the people behind Callooh Callay, the award-winning and unique bar situated just moments away from Beard To Tail.

The restaurant, as the name implies, insists on using all the meat from the animal’s beard, right down to its tail, meaning unusual dishes such as faggots, pigs’ trotters and offal salad feature on the menu.

We began our feast with sautéed ducks livers with apple and hazelnuts on toast, which was a delicious start to the evening and served by our extremely helpful, friendly and charming waitress.

For mains, we went for a whole rack of ribs, covered in the most delectable bourbon sauce, along with grilled corn on the cob. It was no mean feat to finish these, but every single rib was so juicy and succulent it was hard to resist. Likewise, the meaty Beard To Tail burger was on a par with some of London’s top burger bars, perfectly cooked and extremely tasty. The fat daddy double dipped chips were impressive, as were the sweet potato wedges, both arriving in mammoth proportions.

Although we were definitely far too full, we could not leave Beard To Tail without sampling one of their gargantuan desserts. We opted for The Sundae Bible- a heavenly, decadent sundae filled with pieces of gingernut cheesecake, homemade milk ice cream and topped with lashings of whipped cream and southern comfort syrup. We may just go as far to say this was the best dessert we have ever experienced in London. Quite some feat, but one that will not be easily matched.

StyleNest also sampled a selection of the unusual cocktails on offer at Beard To Tail. Their cocktail list rivals those of any established bar. Think drinks served in soup tins, Absinthe laced cocktails and Bloody Mary’s with a pork jus and you get the idea. Beard To Tail also offer an extensive list of rare and exquisite whiskies, to round off a sumptuous meal.

Needless to say we will be returning to Beard To Tail very soon. Lovely staff, amazing food and a warm and relaxed atmosphere make this one of London’s best new restaurants.

Click here for our review of New Street Grill.