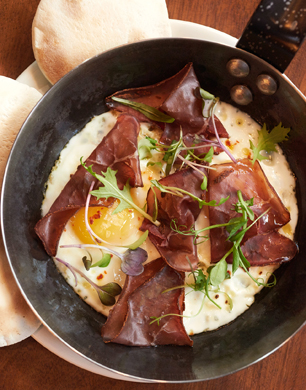 I’m fond of Middle Eastern food. Having been brought up by parents who’d lived in England, Trinidad & Tobago, Kuwait, Thailand, and Kenya, there was a keenness to broaden my taste palette from a young age. Arabic cooking’s punchy flavour profile, complete with all those sun drenched spices, sticky molasses glazes, and exotic herbs, is enriching to the soul. Promising a modern, lands of the Levant-inspired menu, Arabica was the answer to my winter spice-craving prayers.

Located in the heart of Borough Market, Arabica faces stiff competition from a host of restaurants in the area all striving to offer something a little bit different and unique. What immediately stood out to me about Arabica was the sleekness and professionality of its set up – there aren’t enough Middle Eastern restaurants like this in London. As charming as the Arabian-nights theme can sometimes be, Arabica’s stark exposed brick décor was refreshingly cliché-free and suggested a focus on the cuisine.

We started off with a bottle of Spanish red wine (Mencia 2012, Valedorras) which was soft and comforting on the tongue, perfect to accompany strong rich food. Tackled first on the menu was Hummus with Spiced Lamb Fillet and Moutabel (a dip made from blended aubergine, tahini, and garlic), both were served with warm flat bread. Deliciously balanced in flavour, we couldn’t let them go when the main courses came and kept the dips to the side of our table for the rest of the meal.

The main events were Sticky Lamb Belly & Ribs, and Chicken and Pistachio Shish. The lamb came with a pomegranate, honey, and chilli glaze, and was exceptionally tender. The Chicken was a little less confident in flavour, and would probably suit those with more pedestrian tastes, but did have a generous pistachio coating. On the side we had Spinach and Feta Boregi consisting of billowy pillows of filo pastry filled with melted feta and wilted spinach, and Batata Harra; triple cooked potato chunks dressed in garlic, chilli, onion, pepper, and coriander – these were a revelation and sinfully moreish.

Service was friendly and warm, plenty of recommendations were made and appreciated in helping us to navigate the very comprehensive menu. Pudding had to be a selection of Baklava (excellent in quality here), and pistachio and mastica ice cream. If you’ve never tried Mastic flavoured ice cream, do so. It’s an opportunity to discover an unfamiliar and unique flavour, probably unlike anything you’ve had before. There was also a baked persimmon dish (my favourite fruit) on the menu which unfortunately had sold out, no doubt it was delicious.

Arabica’s interpretation of Middle Eastern food renders it very approachable to both those who are familiar with the cuisine and newcomers alike. It does this not through simplification or dumbing down of the region’s cooking, but rather by utilising obviously top quality fresh ingredients, and skilled chefs. The result is smoky, sunny, spicy, sumptuous food that was truly blissful on a cold January Tuesday.