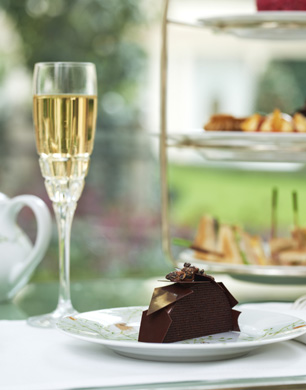 As France’s first “Palace Hotel” – the mark awarded to those which deserve higher than a five-star status – Le Bristol is one of Paris’ most elegant and historic destinations.

Also home to an impressive 4 Michelin stars, the hotel is as known for its gastronomy as it is for its luxurious stays, and afternoon tea at Café Antonia is no exception.

Chef Julien Álvarez, who was announced as the new Pastry Chef at Le Bristol little over a year ago, had already made his mark on Café Antonia’s menu, respecting the traditions we all know and love whilst adding some innovative changes.

Unlike other hotels in Paris, which serve a patisserie-only Thé Français, Le Bristol stays true to the British heritage of afternoon tea with finger sandwiches and scones. However, Alvarez has added some French flair with the addition of popular delicacies such as veal alongside the more classic smoked salmon and roast chicken and fresh vegetarian fillings. The scones are surprisingly, but pleasingly large, and almost cake-like in texture with their soft sponge interior. Rather than the classic fruit and plain options Alvarez has added an another unexpected twist, not only tweaking the texture but also playing with the toppings, adding toasted nuts for crunch and flavour, and a berry crumble with a hidden compote to the fruity option.

The patisserie though, is the true pièce de résistance. Beautifully presented, the cakes are a unique selection of flavours, colours and styles which delight both the eyes and the palate. Our presentation included a contemporary take on classic citrus in the form of a light and fruity yuzu roll, an almost retro banoffee-inspired miniature pie with a vanilla topping, and a heavenly chocolate mousse-filled slice topped with gold flakes. Like the generous scones, rather than being traditionally tiny these miniature works of art are also a dessert in their own right. But if you need the time to indulge there is no rush at Le Bristol; while other hotels stand of ceremony with more formal dining, afternoon tea at Café Antonia is a leisurely affair. Staff are efficient without rushing, refills of tea are very forthcoming, and the open plan design of the café allows you to sit back, relax, and take a glimpse inside the world of Parisian café society, perhaps also with a glass of champagne in hand.

Guests heading over for a Christmas break can also indulge in Café Antonia’s special Hot chocolate Christmas menu with a patisserie by Chef Julien Álvarez, priced at €28 and availanle between December 1st and 31st.