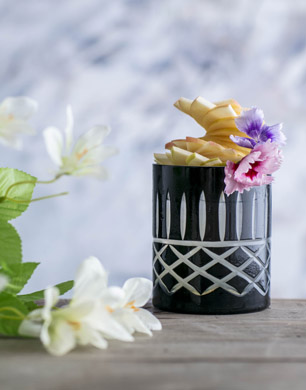 The entrance to the venue for our mid-week drinks doesn’t give much away: not that it’s as vast inside as it is, nor that it has played host to industry legends such as Jimi Hendrix, The Rolling Stones and David Bowie.

That was a long time ago, back when it was called The Marquee Club, which opened in 1964 and was the scene of suitably debaucherous nights for London’s style set. Closing in 1988, it reopened in the ‘90s as Conran’s Mezzo – and as of 2016, it’s harnessed all of the history of the address into an eponymous name: 100 Wardour St.

Down in the basement is the restaurant, presided over by chef Jonas Karlsson and serving food until 2am – but tonight, we’re all about the top floor, the front section of which has been decked out in a profusion of blooms for its incarnation as The Tanqueray Garden. Flower arches and petal studded walls form the ideal Insta-prop for your evening, although it seems that our server isn’t so well-versed in the requirements of socials, since he manages to snap a none-too-flattering pic of us which completely frames out the archway under which we’ve fetchingly positioned ourselves. “All glower and no bower,” we grumble (that’s a hashtag waiting to happen, surely?!) “He’d never make a good Insta-boyfriend.”

What the camera skills of the staff lack, the mixology prowess of the bar makes up for, with its refreshingly summery Tanqueray gin cocktail menu. Each cocktail is priced at £10; even so, we make fairly short work of a Bijoux (Tanqueray No. 10, Sweet Vermouth, Green Chartreuse and Orange Zest) – and a Greater London (Tanqueray London Dry, Lemon Juice, basil leaf, grapefruit wedge and a homemade syrup of cardamom, juniper and verbena lemon), In our defence, we do make valiant attempts to take things slowly on the drinks front by scoffing padron peppers from the bar snacks menu; nevertheless, it’s not long before we move on to a Wicked, which combines flavours of apple and raspberry with the gin base, and an English Field, where elderflower, egg white, lemon and cucumber join up in that most foolproof of marriages.

The presentation is gorgeous: coppery glasses, jewel tones, petals and extravagantly arranged fruit pieces. Combined with the flower-bedecked surroundings, the flickering light cast by tealights in Moroccan tea glasses and the stylish drinkers drifting in from the streets of Soho, it’s an undeniably pleasant way to kick off a summer evening out.

The Blossom City installation will be in place at 100 Wardour Street until the end of August – and if you manage to get a more bower, less glower photo than we did, be sure to tag it #tanqueraygarden.