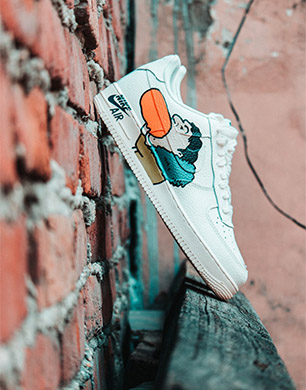 It might seem bold to claim that the most important sneaker ever designed can be so easily designated, yet the Nike Air Force 1 is unlike any other shoe on the market. In the 35 years since its release, there have been few changes made to this iconic design. This sneaker, which has become renowned for its distinctive monochrome black and white colour scheme, is quite unlike any other sneaker on the market.

During the 1980s, when the Air Force 1 was first unveiled, it spawned a technological revolution. During the ’90s, as the concept of retro began to take off, the sneaker set off a cultural revolution. Finally, the coming of the new millennium heralded the Air Force 1’s rise to international fame and recognition.

After over two thousand iterations, the Nike Air Force 1 sneaker has evolved into one of the best selling athletic shoes of all time. The Air Force 1 is definitely an icon, but what exactly sets this shoe apart from the competition?

In order to appreciate what it is that makes this sneaker so special, it helps to understand a little bit about its pedigree. The Air Force 1 was first designed by a man named Bruce Kilgore. His is a name that features heavily throughout Nike’s history and he is responsible for many of Nike’s most iconic designs. The Air Force 1 is certainly an iconic shoe, but what makes it so special?

Kilgore was trained as a product designer and applied the skills he learned to anything that needed designing. Beginning with household appliances, he was soon developing cars and, ultimately, he took a position at Blue Ribbon Sports, the company that owned Nike at the time. After arriving at Nike, he was partnered with Jeff Johnson, the first-ever brand employee. Together, Kilgore and Johnson were tasked with perfecting the design of the track spike.

The pair analyzed foot x-rays and the performance of individual track athletes in order to design a new series of spikes, dubbed the Zoom. These spikes are widely credited with assisting Carl Lewis to his four gold medals at the 1984 Olympics. It was after this that Kilgore was first moved on to the basketball division. Here, he was to design the first basketball shoe that featured the iconic Air unit in the shoe’s sole.

In 1979, the Nike Tailwind first debuted. The sneaker was an immediate success, but before long the company found themselves stagnating in the field.

Kilgore has frequently described himself as a minimalist designer. You only need to glance at the Nike Air Force 1 to see that it is a minimalist masterpiece. Not only does the sneaker feature Kilgore’s minimalist design, but it also incorporated a number of ideas put forward by

Nike’s DCEC Committee, which consisted of individuals trained in biomechanics, physical training, podiatrists and aerospace engineers. All of these individuals were tasked with assisting the designers in incorporating the Air technology into the shoes. The Air Force 1 ended up being something of a technological marvel, coming to define basketball sneakers throughout the 1980s.

The Air Force 1’s distinctive slanted cut at the top of the shoe was inspired by Nike’s hiking boot. This small touch enhanced the support offered by the shoe while also improving its flexibility. The inclusion of a cupsole meant that the Air Force 1 was one of the most durable shoes ever designed. Kilgore also had the bright idea of including a circular outsole tread, which was added with basketball in mind.

After receiving the first Air Force 1 production prototypes from the Nike laboratory in Exeter, Kilgore filled his car boot with pairs of sneakers and began handing them out to college basketball players. He used the feedback he received from these players in order to further refine the design of the shoe and to direct his future efforts.

One of those lucky students who was able to test out the Air Force 1 prototype was Tinker Hatfield, known as a savant in the sneaker world today. In 1981, Hatfield joined Nike as a footwear architect. He was given one of Kilgore’s prototype Air Force 1s and was so impressed with their design that it spurred his ongoing interest in footwear design.

Similarly, the original model didn’t feature the now-famous low-cut profile of the shoe. Instead, the original featured a high top and a proprioceptive belt (also known as an ankle strap), in addition to a side panel made from mesh and a colourway that utilised a grey and white colour scheme.

During the 1990s, Nike decided to ditch the mesh side panel that had been a defining feature of the shoe until then. It was replaced with the same style of leather that was used across the rest of the sneaker. This alteration gave the Air Force 1s a more distinctive and uniform silhouette.

The 1990s saw an explosion in the popularity of the Air Force 1 amongst a number of predominantly African-American communities. The Air Force 1 became the de facto official shoe of Harlem, New York. Throughout the ’90s, Air Force 1s gained popularity amongst hip-hop artists and began to appear outside the strongholds of Baltimore and Philadelphia.

The last five years have seen a number of the major players from the fashion industry taking an interest in this iconic piece of footwear. No one could have anticipated 10 or 20 years ago that the Nike Air Force 1 would have the staying power that it has shown. Today, these sneakers represent a throwback to the street culture of previous decades while maintaining a modern look and feel. The deft blend of retro sensibilities and modern manufacturing define the Air Force 1 for many.