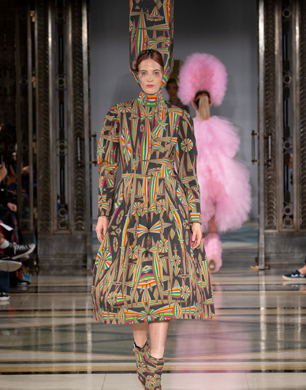 As Fashion weeks go, this was a biggie, all eyes were on Victoria Beckham for her 10th Anniversary Show and another British designer, Mary Kantranzou was also celebrating her tenth season over at the Roundhouse, the fash pack were out in force for Alexa Cheung’s first collection and over at Burberry all eyes were on Tisci, the man credited with creating streetwear.

I had a huge amount of allocations for this fashion week and for all the glamour of the shows, the reality is, that the schedule is often pretty brutal and certainly not the healthiest of lifestyles. I basically inhale caffeine over the 5 days,  grab whatever food I can and usually end up with “Fashion flu” by day 6. So, with this in mind, and with self care often very far down my agenda, I decided to get Fashion Week ready. First off, I  visited Sarah Bradden for some facial acupuncture, if you haven’t visited Sarah, you are missing out, she is a magician, I looked about 5 after just one session with her and I will most certainly be going back. 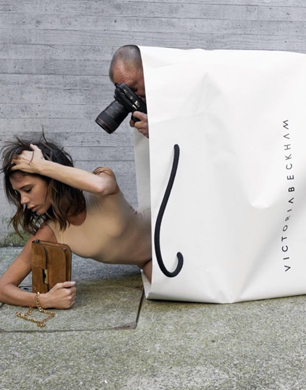 Next, with my skin and general anxiety levels sorted, I needed to get some hydration and vitamins into my system. Enter; Get a Drip,a collaboration with Fashion Pharmacy at the Shop at Bluebird this, as the name suggests is an IV drip tailored to your individual needs, I opted for the sports drip to give me maximum hydration energy and vitamin c. I also added a bolt on of vitamin b12 as my levels of this were low.

#PositiveFashion was the hashtag this season and although there’s still a long way to go, as a seasoned pro at this fashion Week lark, I can confirm diversity is very much on the agenda; 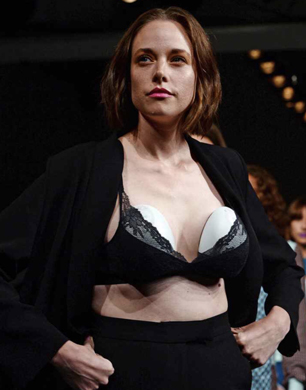 At Pam Hogg, a Designer who spearheaded Diversity long before it became a theme in fashion, the celeb count was HIGH (at my last count, Brooklyn Beckham, Melanie Blatt, Ray Winston and Rose McGowan). This show was classic Pam Hogg & if you’re looking for strong female representations on a runway, you won’t be disappointed. It was all très emotional over at Dover Street for  Victoria Beckham’s highly anticipated 10 year anniversary show which included the model Stella Tenant, who, at 47 was flying the flag for the over 40s…

At Teatum Jones, nominated as BFC representatives for Positive Fashion, their round table, not runway, film for 16 Days of Activism presentation, discussed what is fashion’s role and responsibility in the protection, unification, inclusion and equality of women.And the youngest of all, at Minimode, 8 year old double amputee model, Daisy May Demetre made her debut at Fashion Week. 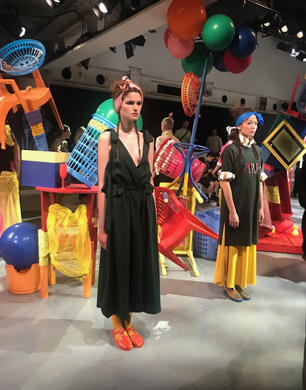 So, my highlights; balletic beauty at Gayeon Lee, Markus Lupfer – a revelation, I own a Markus Lupfer piece, but it is the bold lip tees he is more famous for, so to see beautiful hues of  green, lilac and blue sequinned dresses at his Somerset House presentation was both a departure for him and a surprise to me.

At Bora Aksu we were treated to an absolutely stunning catwalk show with pieces inspired by Romani poetess Papusza. With celebrity fans such as Keira Knightley, you can expect to see much more of Bora Aksu off the runway. Gorgeous, Grecian, inspired loveliness at Tata Naka as well as an eminently wearable collection at Edeline Lee, in all honesty,  I could wear every piece.

A  bold, angelic presentation by Steve O Smith, dramatic and divine couture at Malan Breton, a  rainbow coloured jelly shoe-d delight at Minki and a and a career highlight for me;  backstage at Mark Fast with the TIGI and Illamasqua crew creating fierce dessert goddess looks reminiscent of Janelle Monae and Beyoncé  and Frow at Roberta Einer.

And the trends? Lilac was omnipresent, the Pantone colour of 2018 ain’t going anywhere fast. Also greens and yellows (one of my fave dresses was green AND yellow at Malan Breton) head gear was a another theme,  from bonnets at mother of pearl, head dresses at Bora Aksu and huge statement hats at Pam Hogg.

Expect to see me sporting all of these (possibly at the same time) for spring/summer 19.