8 Brands to Rock the Skater Look This Summer 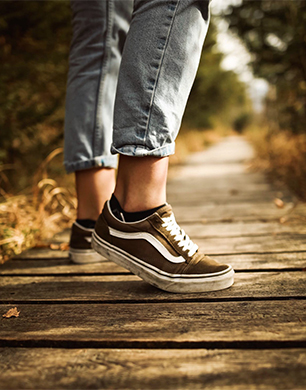 While skate icons like Patti McGee have been proving that skating is not just a boy’s affair since the mid 1960’s, it’s only in the past few years that we’ve seen more ladies enter the scene.

Lacey Baker made a splash by placing first in both the 2016 and 2017 SLS Super Crown World Championship, while Nora Vasconcellos and Lizzie Armanto continue to break ground in a predominantly male sport.

Despite most of this progress only happening recently, the allure of the skater girl look has captured the imagination of many for as long as it’s been around. It’s safe to say that few styles are as capable of embodying So-Cal cool quite like the skater aesthetic.

Fortunately, there are plenty of chic skater brands for you to choose from. Whether you’re passionate about nailing those kickflips and ollies, or you simply enjoy being part of the culture, here are 8 brands that’ll help you rock the skater look in style this summer.

Alongside their physical Paris-based store, Wasted is also a collective that compromises of a team who is passionate about the art of skating. Their wide range of quality hardware will help you hit the concrete in style, while their impressive lineup of women’s pieces incorporates everything from snazzy dresses to chic crop tops.

Of course, no list of skate brands would be complete without a mention of the one that arguably made it mainstream in the first place. Vans has been around since 1966, which has given them plenty of time to refine their craft and create a functional and stylish line of footwear, apparel and accessories for both men and women.

Collaborations with the likes of Madame x X-Girl, Lazy Oaf and Naked have proven that Vans is just as focused on creating skate-inspired pieces for women as they are for their predominantly male audience. From the iconic Sk8-Hi, to their ever-growing range of hoodies, jeans and dad caps, there’s plenty to choose from here.

While Santa Cruz has for long been associated with their striking and detailed graphic designs, there are many more pared-back garments in their collection as well. Versatility seems to be a major focus, with embroidered long sleeve tees, plush hoodies and classic t-shirts that’ll easily win the approval of your skater friends.

Infamous founder and creative director Jason Dill was working with the likes of Supreme before establishing his own New York-based fashion brand, a rather aptly named F*cking Awesome. Provocative messages can be seen throughout, with striking designs and unique prints that accurately capture the angsty skate culture of the 90’s.

Similarly to the brands that inspired F*cking Awesome, supply is limited and demand is high, so finding their clothes is more of a challenge than picking out your favorite pieces. Fortunately, Sivasdescalzo has you covered, with plenty of F*cking Awesome apparel and accessories to choose from.

Since being established by Shawn Stussy back in the 80’s, the American clothing brand has gone through many transformations. Prior to the founder’s resignment, Stussy’s apparel was focused more around those who associated the word “board” with surfing than skating, but today, this is no more.

Stussy’s diverse lineup of feminine, skate-inspired garments is now better than ever. From unique tracksuits to retro dresses to wild logo-print tees, one can no longer only associate Stussy with minimalism. That said, there are still plenty of high quality essentials if you prefer sticking to the basics.

Carhartt WIP is better known for their “buy it once and wear it forever” approach to classic American workwear, but their range has since expanded to incorporate a variety of skate-inspired women’s apparel. High quality, but still reasonably affordable sweatshirts and hoodies dominate Carhartt’s lineup, while their denim is also a reliable buy.

Nikita is perhaps the most well-known OG skate brand that doesn’t let the boys in. In fact, the reason for the brand’s creation stemmed from the disappointingly low number of brands that were geared towards women’s skate apparel in the 1990’s. Almost two decades since their inception, Nikita is still killing it.

Comfort and practicality is still a major focus with their garments, while feminine tones of blush pink, light grey and faded blue dominate the main color palette. Perhaps the most heartwarming part about Nikita is that the brand champions female creatives, providing a welcomed platform for empowerment in the women’s skate scene.

While their clothes are mainly geared towards the male audience and are notoriously difficult to get your hands on (unless you’re okay with paying thousands of pounds for a hoodie), it wouldn’t be fair to avoid mentioning one of the most influential skate brands of all time.

While your wallet may not be all too fond of you by the end, you’ll be more than satisfied with the wide range of feminine skate apparel on offer today. Just don’t carry around a board if you’re not going to use it – that’s just silly.