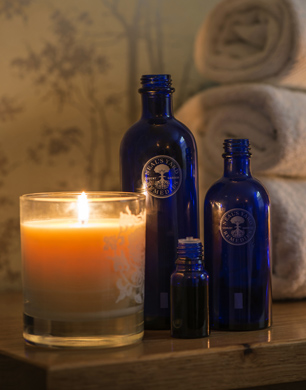 It’s no secret: I have problem skin.

Often dry, incredibly sensitive and under attack from hormone induced acne at least once a month, at the age of 21 I am still suffering through teenage skin. As such, I am rather well rehearsed in skincare, and all the treatments that promise smoother, clearer pastures: top of the range cleansers and vibrating tools with which to use them, salicylic acid, microdermabrasion, antibiotics, medicated topical creams that have bleached my clothes and, of course, facials. A whole lot of them.

Facials, though divine, are a treat I had previously been wary of. The nature of my dermatology issues being hormonal mean that problems aren’t derived as a result of how clean my skin is, and anti-ageing is not yet a concern for me. The luxurious creams generously slathered on during treatments can often make matters worse, then, only contributing to the sebum that builds up beneath my skin. All things considered, when I was offered the chance to visit Neal’s Yard Remedies for a Signature Facial, I was in two minds – my skin had been playing up for a few weeks, but the opportunity for a dose of TLC too tempting to pass up. I booked in.

The Neal’s Yard Remedies therapy rooms sit plummily on the King’s road, a short walk from Sloane Square station. It’s a neat set-up: the shop, filled with a delicious mixture of fragrances, sits upstairs, alongside a waiting area where you can sip on Elderflower and Echinacea tea before your treatment. The well-kept, friendly staff let me know that Nicola would be my therapist – who then appeared, conveniently, just as I had finished my cup. The therapy rooms sit downstairs, where the ambience is cosy with a luxe feel fitting for the holistic treatments offered there; the sauna in the bathroom was, I felt, a very nice touch.

Tucked into a sumptuous bed beneath an electric blanket, I ran through with Nicola my long list of skincare woes. Totally unphased, she examined my skin under a bright light and stated she’d be using their Rose skincare for sensitive skin, with some variation during parts of the treatment based on my needs – the attention to detail in her consultation was incredibly impressive and, based on the results, spot-on.

Lasting an hour, the treatment consists of a cleanse and exfoliation, followed by a foot massage whilst steam blows onto the face, to open pores. Congested pores are then extracted – a task Nicola admits to finding incredibly satisfying – and a cooling mask painted on. Based on my combination of problems, Nicola used Rose Formula on the majority of my face, and then Palmarosa Purifying Mask on my chin, where my acne is prone to flaring up. Whilst the mask sets, the neck and shoulders are massaged and knots teased out. Hot clothes then remove the treatment and a refreshing toner is applied, alongside a generous dose of moisturiser. The results are, frankly, quite heavenly.

As is the norm after a facial, my skin was looking a touch irritated – but no where near as much as usual, and more than anything, I could feel that it felt soft, plump and rejuvenated. I left the treatment rooms feeling revived and in a much better mood than which I arrived. Fast forward two days, and I can report that my skin is glowing. It’s clear too – putting make-up on this morning, there was no need for my usually careful application of concealer, a joyous novelty for me. It is refreshing to have been so well looked after, with such attention paid to my various needs. If you’re ever in need of a skin SOS, these are your people.