A cream to rival Botox? Meet the Forehead Line Eraser By NassifMD 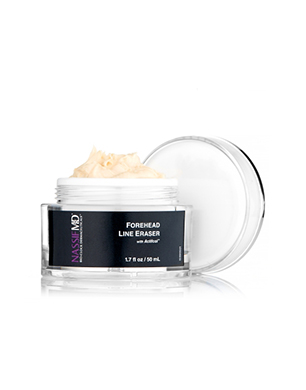 Personally, I love laughter lines on a face – all representing happy times and memories.  I am not so keen, however, on the ones that indicate times of stress! I understand it is part of life, but I’d rather focus on the good times!

Botox is obviously an option, I’ve had it before myself, but I don’t feel quite ‘me’ with it – I prefer it when it has just about worn off and the wrinkle smoothing effects are visible but full movement has returned. So, when I was offered to try Forehead Line Eraser by Nassif MD (as in Dr Paul Nassif), I was keen but sceptical! Could a cream really give a noticeable improvement to expressive forehead lines?

Well according to the clinical studies, yes, it can. This is mainly due to a Shitake Mushroom extract which has been shown in studies to firm the skin, and Aquacell, which has shown in pilot studies to reduce the appearance of fine lines. So far, so promising!

The cream itself feels luxurious yet lightweight (like a whipped cream-mousse) and absorbs really well into the skin, it instantly brightens the complexion due to light-reflecting particles but doesn’t make you look ‘shiny’ at all. The pores also become instantly less visible (resulting in me using the cream over the apples of my cheeks too!). I love the glow from it so much that I started using it on my décolleté too – maybe it will give me a few more years in strapless dresses?!

After a couple of weeks, I did start to look more ‘rested’ the expression lines were still there, but they looked a bit plumper and less deep. Fast forward another 2 weeks and things are looking good! There is a definite improvement to the overall appearance including the frown lines! This cream cannot rival the results you get from Botox but it can certainly help to reduce unwanted lines. Perfect for people who don’t want to go down the Botox route (or at least not yet) or great for use between Botox appointments to maintain results and reduce the frequency of your appointments! Wrinkle reducer and money saver? That’ll add to the smile lines!