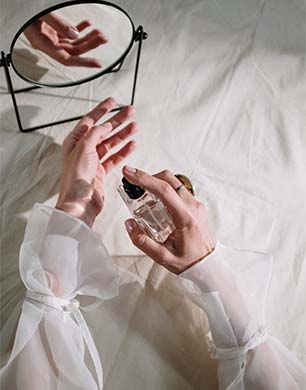 There’s no denying it, a lot of people simply adore their favourite celebrities. If Katy Perry were using a regular or less-popular fragrance, most of her fans would probably follow suit. There’s nothing to be ashamed of, your thought process is in the right place. Maybe you’re wondering what your favourite wears. Or, maybe you’re probably trying to figure out what those influencers and celebrities prefer when they aren’t advertising for a brand. So, let’s take a look at the 8 perfumes that your favourite celebrities actually wear.

The name is catchy, the bottle is almost as sexy as Posh herself. However, what’s most interesting about this citrus, sandalwood, black amber, and scarlet scent is the celebrity that announced it to the world. Room service is a fairly new fragrance, so Victoria Beckham calling it ‘super chic’ on Instagram certainly made it one to look out for.

The Diamonds crooner may not be named the sexiest woman on the planet. However, she is just that to many of her fans. Plus, other A-listers like Jennifer Lawrence have raved about how good Bad-girl Riri scents are. So, what luxurious brand does she wear? Drum roll, please. It’s a surprisingly novel bottle of ‘Love, Don’t Be Shy by Killian. The sweet and rich blend boasts of a marshmallow and neroli scent that’s absolutely divine to the senses.

So many people want to know what actresses wear to give them the added confidence on set. It’s an admitted factthat many actors choose a bold or familiar scent that either makes them feel good or more in character. However, what do former actresses turned Duchess of Sussex wear daily? The Jo Malone London’s Wild Bluebell does it for Meghan. The light and fresh notes probably keep her feeling confident and in control.

One bottle costs about £98.

Celebrities like Cheryl Cole, Lucy Hale, and Emmy Rossum are some of the A-listers that rock the Viktor Rolf Flowerbomb. Ariana has admitted that she’s a sucker for scents and loves fragrances that smell amazing. The Flowerbomb made it to the top of the list, so we must believe that it smells absolutely divine.

Hailey raved about this delectable scent in an interview with Elle Australia. She gets it from Bond No.9; a fragrance store that’s actually on Bond street in the outskirts of New York. She didn’t recall the name at the time but described it as a star-shaped red bottle with music notes on the body. She loves the fact that it’s unisex, not too fruity or woody. Just something right for people who appreciate amazing fragrances.

Scents appeal to different people’s characters. That’s why some people may be averted to something you deem really nice. So, if you’re more of a woody notes person, wondering why Blake Lively wears the fruity Eau Premiere by Gucci, that’s probably what suits her bubbly personality.

Kylie has a remarkable and enviable beauty brand. However, she admitted that she isn’t so crazy about fragrances as it gives her headaches. That’s why she sticks to Victoria Secrets’ subtle yet fruity Coconut Passion spray. Strong scents are named among the common causes of migraines. So, if you freely enjoy all kinds of scents without any side effects, enjoy the blessing.