Untouched, underdeveloped and the perfect place for adventure. Fuerteventura has it all. 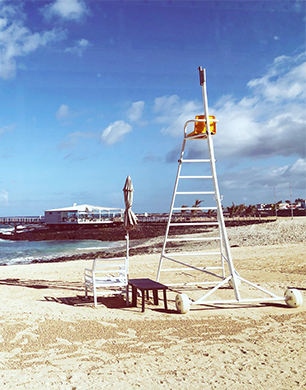 If you’re craving some winter sun, and let’s be honest, who isn’t in January? The Canary Islands might be just what you are looking for. Tropical climes, desert landscape, stunning beaches and an abundance of watersports, are just what you need to shake the winter blues away. Although it’s part of Spain, the second largest of the islands, Fuerteventura is only 62 miles from Africa, and it possesses a kind of barren, desert-like beauty more reminiscent of Morocco than anywhere in Europe, which makes it an exotic destination at any time of year. Despite the volcanic terrain, it has some of the best beaches in the Canary Islands and is the least developed of the archipelago’s main islands by far.

Of course you can head to the beautiful island of Fuerteventura just to relax on a lounger. With plenty of resorts, the four star Suite Hotel Atlantis is all-inclusive and has eight on site pools to tempt you. With numerous buffet style restaurants, adults only areas, sporting facilities, kids club and drinks on tap, you might not want to leave the complex.

However, if you do venture out (and let’s be honest, why wouldn’t you!) expect to spot lots of bleached blond boys and toned, tanned girls who make the place look pretty with their bouncy hair and surf boards. The island is super popular with international visitors who descend for the watersports- thanks to the near-constant breeze that blows across the island, but seemingly they fall in love with the easy going culture, sun and lifestyle, so end up staying.

If you’re feeling adventurous, there is plenty to tempt you in the way of water sports and you can hire equipment or have lessons in everything from kayaking, kitesurfing or windsurfing to stand up paddle boarding and surfing. And although it isn’t as tacky as Tenerife, you can also get jet skis in certain bays.

I achieved a childhood ambition, and poured myself into a wetsuit for a surf lesson with Fuerteventura Surf School; Conveniently located at the uber cool Sunset Bar, in the north of the island,  the tanned, tousled instructors will whisk you off in their surf wagon to the beginner’s beach. Don’t expect any special treatment with the waves though, they might not be as gigantic here, but they are still pretty daunting! For any skeptics, it is possible to stand up.. But only if you have impeccable balance. Small groups are led by two (very patient) instructors who give beachside training and are with you in the waves to help give you the confidence to stand up on an eight foot piece of fiberglass which is bobbing in the waves! Invariably you will fall off, but that is part of the fun. And if all else fails, you can just mout the board and paddle! A perfect prelude to some lunchtime cocktails back at the Sunset bar!

With over 100 beaches scattered across the island  you can discover one suited to you. Whether you like people watching or are looking for something more deserted or even nudist; There are even beaches with white, black or golden sand and some beaches are renowned for their waves, whereas some have none. You will be spoilt for choice, but you will need to hire a car and go and find them.

Fuerteventura is an arresting patchwork of bone-dry plains, gnarled lava fields and craggy volcanic ridges, and was formed approximately twenty million years ago when volcanic activity under the ocean caused molten magma to rise to the surface; The result after cooling is the group of Canary Islands. Anyone remotely interested in geology will be in their element. Visitors cannot ignore the island’s volcanic origin but there is more to see than just craters and cones; the landscape is remarkable consisting of sandy roadsides, sand dunes and desert. An ochre backdrop is a natural paradise and conservation is prioritised over development and resorts are in keeping with the scenery and the skyline is not marred.

The surroundings are best soaked up by car or off-roader. I booked a day with the Mehari Experience, to see the real island, and kick up some dust! Big enough for three passengers, a day’s itinerary takes you to the island’s hotspots, including camel riding, cruising along Mirador Risco de las Peñas between Betancuria and Pájara, where you can park up and do some chipmunk spotting and volcano climbing at Lajares Volcanos, followed by lunch at the beautiful old fishing harbour of El Cotillo.  The famous El Cotillo lighthouse is in the exposed North West corner of the island, and has impeccable ocean views all the way along the rugged coastal drive. The sea surrounds the lighthouse in a large horseshoe and the waves crash in every direction, seemingly battling for attention, and wowing the windsurfers. However, the piece de resistance is the Parque Natural de las Dunas de Corralejo. A National Park consisting of endless, surreal sand dunes. It’s no wonder they featured in Star Wars- they are truly out of this world! Being chauffeured in the windowless buggy means you can enjoy the scenery without having to concentrate on avoiding the bumps, and admire the goats being herded across arid plains.

Most holidaymakers head to the south-western resorts of Los Cristianos, Playa de las Americas and Costa Adeje where the bulk of the island’s holiday accommodation is located, but there is a different vibe in each suburb, and visitors are welcome. Watch the sunrise, and sunset, and enjoy strolling around the pretty whitewashed villages or jump aboard a catamaran to see dolphins and whales up close.. Even if you don’t want to test your limits by doing something adventurous, the vista of sand and sea, and surfers makes it a magical place to be at any time of year.