THE BEST DISTRICTS IN PORTUGAL FOR EXPATS 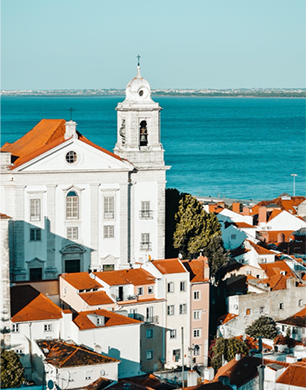 With its outstanding beaches, warm winters, stunning architecture, world class restaurants and vibrant cultural life it’s hardly surprising that over 900,000 expats have chosen to make Portugal their home.  When most people start thinking about moving to Portugal their starting point is usually the capital city of Lisbon, but increasingly expats are discovering that this is a country of hidden gems and affords a great variety of wonderful places in which to settle down.  Portugal has one of the lowest costs of living in Europe and despite a vibrant housing market, Lisbon still offers some of the cheapest accommodation of any capital city in Europe. Look farther afield and house prices can drop by fifty per cent.  Portugal offers a rich quality of life but it’s important to think about transport links and how close you need to be to one of the three international airports, which are situated at Lisbon, Faro and Porto, before you decide where to settle.

Set on seven hills, this fascinating city is home to the majority of Portugal’s expat community.  Its winding streets and ancient buildings serve as a beautiful backdrop against which to enjoy outstanding dining and lively nightlife.  Rich in cultural experiences, this city really does have something for everyone.

Situated in the remote north, just ten kilometres from the Spanish border, this ancient spa town set on the Tamega river is a world away from Lisbon.  Here you will find property at a fraction of the capital’s prices, but you’ll also experience shorter summers and cooler winters. The airport at Porto is a two- and a half hour bus ride.

The country’s second largest city, Porto is situated on the northwest coast and is known for its spectacular bridges and port wine production.  A charming city of narrow cobbled streets, its Ribeira district is lined with cafes and restaurants from which you can enjoy the city’s famous sunsets.

Northwest of Porto, Brago is recognised as the country’s religious centre and is home to Portugal’s oldest cathedral.  Grand baroque buildings and peaceful plazas can be found alongside modern shopping streets.  The presence of a large university ensures that there is always plenty of recreational activities available.  You can reach Porto by rail in seventy-five minutes for fewer than four euros.

Situated on the west coast, on the banks of the Ria de Aveiro lagoon, this is a delightful city of colourful boats, art nouveau buildings and a bustling fisherman’s district.  Aveiro offers outstanding restaurants and nightlife and is a short distance from the beautiful beaches of the Costa Nova coastline.  Trains run every hour to Porto and the journey time is seventy-five minutes.

This riverfront city in central Portugal was the country’s former capital and is home to the country’s oldest university.  There is a well-preserved old town, with its Moorish city walls, towers and gothic religious buildings and vibrant modern city that caters for the large student population.  Over thirty trains a day make the ninety-three-minute trip to the international airport at Porto.