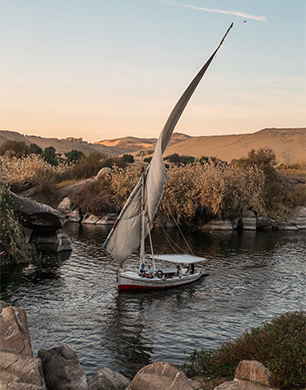 Since the 19th century we’ve been fascinated by Egypt and its mystical sights, from the Great Pyramid of Giza, to Tutankhamun’s Tomb, the labyrinth streets of Cairo to the mysterious depths of the Nile. Egypt’s fascinating history, alluring culture and stunning scenery has established the Middle Eastern country as a hotspot for tourists. If you like the idea of exploring this ancient land, but want to avoid the millions of tourists, here are our top hidden gems in the Land of the Pharaohs.

The City of the Dead

One of the world’s largest cemeteries, the City of the Dead is a Muslim and Christian burial ground that stretches for miles on the outskirts of Cairo. Eerily beautiful, the ancient cemetery has become a residential neighbourhood for around half a million people.

Dating from around the 7th century, some of the tombs are so ornate and extravagant they look like small houses with gardens. The narrow, labyrinth-esque streets only add to the atmosphere.

Escape the crowds of Cairo and Giza and enjoy a tour of Elephantine Island with Jules Verne. Its name means both ‘elephant’ and ‘ivory’ and highlights the important role the island once played in the ivory trade.

The island has a rich history as a port for the ancient Greek and Romans, and now has a host of attractions including temples, gardens, museum and ancient fort.

Possibly the most beautiful coastline in the area, Cleopatra’s Beach is where Cleopatra used to bathe. Thanks to the tidal movements, the cavern where the Egyptian Queen and Marc Antony honeymooned is full of fresh, warm water, and makes for a delightful bathing spot.

The volcanic, and natural hillside of the cavern contains a stunning lake and the whole area is shaded by ancient pine trees.

The Catacombs of Kom El-Shoqafa, Alexandria

Like all great Egyptian finds, the Catacombs of Kom El-Shoqafa were discovered accidently in 1900. The catacombs are the largest-known Roman burial site in Egypt and is one of the Seven Wonders of the Middle Ages. Its stunning architecture is a blend of ancient Egyptian and Roman religion and demonstrates Alexandria’s fusion and acceptance of other civilisations.

The catacombs consist of dozens of chambers as well as a large banqueting room that has a host of elaborate features such as sculpted pillars, statues, sarcophagi and religious symbols.

Many of Egypt’s attractions have a strong connection to the afterlife, and this is in part because of their belief that death was not the end, but merely a transition to the next stage of life. This belief has created some of the most stunning and fascinating places to visit in the world.

If you do want to visit the more popular attractions, it’s worth getting there first thing. Not only will you avoid the crowds, but you’ll get to see a stunning sunrise over some of the greatest creations man has ever made.