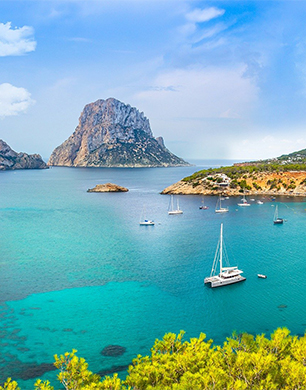 When you think about Ibiza, some may conjure up images of the island’s buzzing nightlife, but that’s not all it has to offer visitors. While there a wide range of bars to choose from, the party side of Ibiza doesn’t really appear too far outside of San Antonio. What you may not realise is that, as the third largest of Spain’s Balearic Islands, it knows how to do family-friendly very well. In this post, we’ve considered four great locations on the island – perfect for the whole family.

Located in Santa Eulalia del Rio is a fantastic jeep safari. Families can go on an adventure which will suit a range of ages. Hop into a jeep and travel through the north, east and the west of Ibiza, literally going off-the-beaten-track as you uncover parts of Ibiza tourists wouldn’t usually venture to.

It’s filled with so much fun in this area; it’s also home to Acrobosc Ibiza, an aerial adventure activity centre. Take to the treetops as you swing and glide your way through a number of obstacles. There are three different routes to enjoy: green routes, blue routes, and red routes, suitable for a range of ages.

Located just 100m away from Acrobosc is the Cala Pada beach. With pedalos, electric boats, a banana boat, kayaks, catamaran sailing and a diving centre, this is not a typical sit back and relax beach. While you can do that, it offers a range of activities to keep all of the family entertained. There are also a few restaurants to the back of the beach which have large terraces where you can take a break after an action-packed day.

If you soaked up enough sun and fancy something a little different, venture into Cova de Can Marca Caves – a magical underground cave system over 100,000 years old. Originally used by smugglers until the mid-20th century, in 1980 they were opened to the public – but with added lighting, stairways and paths for ease of access. Once inside the incredible cave, your tour guide will show you the smuggler’s original entrance to the cave, which sits 8m above sea level down a narrow tunnel.

The capital of Ibiza should be on everyone’s itinerary. Ibiza Town is a picturesque historic quarter and a UNESCO World Heritage Site whose cobbled streets lead the way to the ancient walled fortress of Dalt Vila. It’s a treasure trove of historic buildings, cathedrals, chapels and churches as well as a selection of museums. Outside of the fortress is where visitors will find the heritage sit Necropolis Puig des Molins, an ancient cemetery which houses thousands of underground tombs – you can even take a tour of some of them.

While Ibiza may not always have the best reputation being one of Europe’s most popular destination for partying, it offers so much more with its fantastic range of activities and rich heritage. If you’re looking at making Ibiza your next family getaway, visit Oliver’s Travels to find your perfect villa.