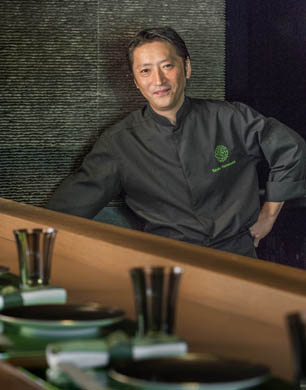 Located at the luxurious Hotel Metropole Monte-Carlo, Michelin-starred restaurant Yoshi celebrates its 10th anniversary this year. Famous as Joël Robuchon’s first Japanese restaurant in the world, the restaurant’s contemporary cuisine is produced under Japanese Chef Takéo Yamazaki, who has been at Yoshi since its opening. StyleNest caught up with him to find out what inspires his cooking, his secret to the perfect at-home dish, and what he and the team has planned for guests to mark Yoshi’s 10th birthday.

Can you tell us a bit more about how you came to be where you are today, and what inspired you to follow a career in gastronomy?

I was born in a small town near Tokyo on October 30, 1969. It was by chance that I became a cook. To make pocket money I started working in a Japanese gargote to make chicken skewers in order to buy my first bike. I took a liking to it and decided to continue in the kitchen. The passion of my profession quickly took over but it quickly became obvious that I lacked know-how. I then joined the Osaka Hotel School. I was quickly noticed by the teachers and in my second year I was one of two students selected to join a school in Lyon for free. I quickly joined the kitchen of the restaurant Le Château before spending six months in the brigade Paul Bocuse. After several experiences in France, I returned to Japan on the occasion of the opening of  L’Atelier of Joël Robuchon. From then on I made all of the openings of my mentor’s restaurants, from London to Hong Kong via Monaco. In 2008, Joël Robuchon asked me to oversee the kitchens of Yoshi in Monaco, a one-star establishment in the Michelin Guide.

What is your earliest memory of food, and do you have any dishes from childhood that you still love to eat now?

Omurice, consisting of an omelette made with fried rice and usually topped with ketchup.

You produce the food at Michelin-starred restaurant Yoshi, Joël Robuchon’s first Japanese restaurant in the world. Any particular career highlights that you can tell us about or any moments that have stood out for you?

I think it would be in 2008 when we opened Yoshi, it was an amazing challenge to be in charge of the menu and find suppliers with quality Japanese products.

Yoshi celebrates its 10th anniversary this year. Do you have any exciting to plans to mark the occasion? And what does the future hold for Yoshi?

We started last month with activities that would put Japanese Culture in the spotlight through 10 moments. The first one was to exhibit an origami art work by Tsuyu Bridwell that is in our lobby, and during these two months of festivities, workshops demonstrating Japanese culture are held to discover the art of the Japanese gardens, origami, together with Master Classes focusing on sake, tea and whisky…We are also featuring a 10 year anniversary menu with 10 of the “best of signature dishes” of our restaurant. The future is to continue to be the best Japanese restaurant in Monaco and the only one to have earned a Michelin star, and maintain the highest level of excellence for the most iconic creations, thus ensuring that Monsieur Robuchon’s legendary cuisine will endure forever.

Can you tell us a little bit more about the creative process behind your cooking and what inspires you?

I love to travel and find my inspirations through these moments, where I go taste different restaurants around the world.

With all of your knowledge and experience, can you share any other secrets with our readers for cooking at home? Maybe tips on something most of us get wrong, or something that you have learnt working in the industry which is also great advice for amateur cooks?

The secret is to have a good homemade broth, it can be used to marinate, to accompany fish or meat or simply for a delicious soup.

For entertaining guests at home, how can our readers elevate a meal from every day to something special?

I think the presentation is the key, as in Japanese culture, you carefully choose the napkins, the cutlery, a nice flower arrangement. Same thing for your dishes. Visual presentation is as much a part of the dining experience as the taste of the food itself, so beauty is always an essential ingredient in any Japanese meal.

Would would be your perfect meal?

I love a good ramen dish.

How would you spend your perfect day off?

Hotel Metropole is located in one of the glamourous places in the world. What are your travel tips for those visiting Monte Carlo, any secret spots you can tell us about?

It’s not a secret spot but the Market of La Condamine is a place I like to recommend.

What are your other favourite travel destinations and what would you recommend our readers do there?

Florence is the travel destination that I recommend, I like the history, the museums and very good food that city has to offer.

And finally, what is your life motto?

Always do your best