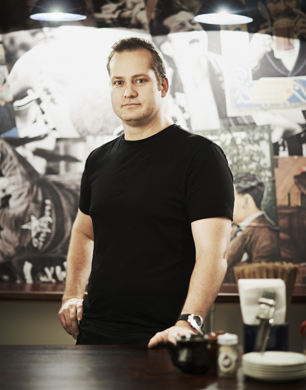 With restaurant names such as Bone Daddies and Flesh and Buns, you know you’re going to be in for a surprise and with queues tailing round the block, you’re guaranteed a treat.

StyleNest spend five minutes with Ross Shonhan, restaurateur to Bone Daddies and Flesh and Buns. We talk Nobu, favourite haunts in London and why he’s in no rush to open more restaurants any time soon.

You launched Bone Daddies in 2012 and now have launched Flesh and Buns. Can you give StyleNest any exciting inside news on any current or future projects you might be working on?

At the moment we are concentrating on the newly opened Flesh and Buns – it’s always exciting to be working on a new project. I don’t have any specified plans for the near future but I’m sure Flesh and Buns won’t be my last word on London’s restaurant scene. Who knows, maybe a Japanese steakhouse?

You were previously a head chef at Zuma and Nobu, what made you decide to leave and start a business of your own?

Every chef has an idea in his head of how his own restaurant would look like if he ever opened one. After years spent in bustling kitchens around the world gathering experience and learning, I figured the time had finally come to fulfil the dream and open my own venture. London seemed like THE perfect place to do so.

You were born and raised in Queensland Australia, how did you first get introduced to Japanese food and cooking?

I was raised on a family-run cattle farm in Queensland where I learnt to appreciate the fresh, natural produce and quality home cooking. Working in Brisbane I was exposed to the technicalities of Japanese cooking and I realised my true love for seafood. Due to Brisbane’s proximity to the Pacific Ocean I could embrace my passion and experiment with seafood locally sourced from the city’s fish markets.

You have a number of reputable restaurants as experience under your belt. What has most inspired you on your culinary journey?

In 2005, I was recruited by the Nobu group and appointed head chef at Nobu, Dallas. Whilst opening the restaurant, my team and I were personally trained by the acclaimed, and highly influential, chef and proprietor Nobu Matsuhisa. Working with the legend and the master himself has certainly influenced my way of cooking and running restaurants. It was an amazing experience.

You have chosen bustling destinations for your restaurants, Soho and Covent Garden. Do you think this adds to the experience of the restaurants?

The busy streets of both Soho and Covent Garden proved to be perfect settings for Bone Daddies and Flesh and Buns. Locating the restaurants in these exciting, popular neighbourhoods I wanted to inject a bit of fun and humour into London’s Japanese restaurants.

For our deprived readers who have yet to visit either Bone Daddies and your latest venture, Flesh and Buns. Can you tell our readers a little about what to expect on the menu?

Bone Daddies is a ramen bar, a Japanese noodle soup dish served with a variety of toppings, making it an exciting unusual dish. Flesh and Buns serves the hirata bun, a Taiwanese steamed bun which will be served DIY-style with a choice of meat and fish fillings.

What are your tips on getting kids introduced in cooking and eating healthy food at an early age?

I would say the key to getting anyone excited about food and cooking is to provide a variety of flavours, textures and colours. The healthiest of salads would be exciting to kids if you use colourful veggies.

We know you have a passion for Japanese food. What other cuisines tickle your taste buds?

I really enjoyed my time spent in Texas – the typical South-Western food is amazing. I had the honour of working closely with Stephen Pyles, one of the trailblazers who helped put South-Western cuisine on the world food map. It was a great culinary experience.

Which are some of your favourite restaurant haunts from around the UK?

Barrafina in Soho. It’s honest food not trying to be anything other than what it is. We always have croquettes and the specials. It was also the first restaurant I took my girlfriend Michelle to.

What helps to inspire you to create new dishes? Is it places? People?

I am easily inspired by everything that surrounds me: it can be new places, scents, colours and people.

I absolutely adore ramen and the hirata buns as they are so versatile and comforting. My personal favorites were obviously behind the ideas for Bone Daddies and Flesh and Bun.

Running two restaurants in London undoubtedly takes up a lot of your time. When you are not busy working and cooking up a treat, what do you like doing to sit back and relax?

I’m very lucky and I love what I do professionally; cooking and running the restaurants are my favorite things to do. When I’m not working I spend time catching up with my friends.

Especially going to BAR SHU in Soho. I always take my chefs and friends there because we can eat tasty ‘bits and bobs’ of a variety of animals. Eating remains the ultimate spare time activity for me.

As a chef you spend hours in the kitchen, do you still get pleasure cooking at home or would you prefer to go out to dinner?

When I have time I love cooking for friends, especially on weekends. Truth be told, during the usual busy week I tend to grab something quick at one of my restaurants during the day.

What advice would you give parents to help prepare time efficient, nutritious and tasty meals for the family?

I feel that it all comes down to planning and preparing the basics ahead of time. My mum would create a grocery list during the week and shop on the weekends to save time.

Timesaving appliances are being launched every day with cupcake makers and chocolate printers. Do you welcome modern tools of cooking in your kitchen or do you miss the former more traditional approach?

I do like a gadget or two and I try to stay on top of the industry novelties. Having said that I tend to stick to tired and tested methods.

What inspirational chefs do you admire?

I’ve worked and met many great chefs in my life. I feel everyone brings a unique vibe and ideas to their cuisine. That’s what makes cooking so great.

Do you have a motto in life?

Click here to read more about Flesh and Buns.