Rachel Riley teams up with the Plaza Hotel 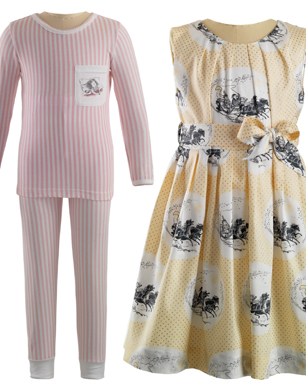 Eloise, the precocious little girl who lives on the “tippy-top floor” of the Central Park hotel first made her debut in 1955 in Kay Thompson’s classic children’s book. The book series follows the adventures of the 6-year-old mischief-maker, who causes mayhem at the hotel, where she lives with her British nanny, her dog Weenie and her turtle Skiperdee.

Now more than five decades later, Eloise is still a larger-than-life presence at the hotel. Aside from a framed portrait in the lobby, she has her own shop on the hotel’s retail level, as well as a themed suite, tea time, ballet lessons, and even cooking classes. And now to celebrate the 60th anniversary of The Plaza, Eloise has her own fashion line.

“For me, it’s just a match made in heaven,” the British designer explains.“She was created in 1955, so it’s an era that’s right up my street, and I’ve always loved the fun illustrations. I have really tried to celebrate the glamour of the 50s with fabrics from the book’s vibrant illustrations. It is exciting to recreate outfits that reflect the irrepressible spirit of Kay Thompson’s most famous six year old in a way that is relevant for children today.”

Since the Plaza owns the copyright to the books, they contacted Riley three years ago to create the 33-piece collection which includes a variety of pieces from dresses to pyjamas and outerwear and as you would expect the items contain the usual fine tailoring, beautiful hand smocking and embroidery and vintage peter pan style collars.

The collection is available to buy exclusively at the ‘Eloise at The Plaza’ shop and online at www.rachelriley.com with prices starting from £18 up to £186 and available in sizes 12 months to 10 years.