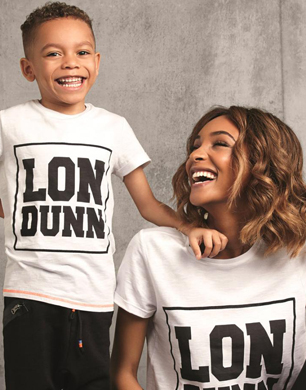 Jourdan Dunn, the world’s 10th highest paid model, has been revealed as the latest star to join Marks and Spencer’s design collaboration.

Launching a kidswear line called Lil’ LonDunn, the 25-year-old mother of one, celebrates her love for her hometown London and has been created with her six-year-old son, Riley, as inspiration. The range is aimed at both boys and girls from age five up to 16, and is an urban, upbeat collection made up of 22 pieces.

The model has been closely involved in the direction of the project from the very beginning, working on all aspects from fabric and fit through to photography and creative campaign style

Speaking of the news, Dunn said: “I’ve been a big fan of M&S since I was young and have fond memories visiting our local store with my mum as a kid.”

“My collection is inspired by London and has the cool, urban vibe that I look for when choosing clothes for Riley. It’s been an absolute pleasure to work on this project with such a big British retailer, and I can’t wait to see the clothes on Riley and all his friends.”

Just last week it was announced that Alexa Chung has teamed up with the high street chain to collaborate on a vintage inspired range. Both Chung and Dunn will join the likes of Rosie Huntington-Whiteley, Twiggy and Lulu Kennedy who already design successful collections.

Start clearing some space in your kid’s wardrobes!

The collection hits stores and goes online in April.