The rise of the co-working space 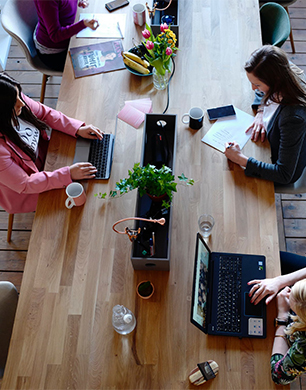 At the end of last year, my fiancé and I moved back home. We had been travelling for over a year at that point. During that year, I had successfully managed to convert her into a competent content writer. She had been stubborn at first, but she warmed to it eventually, and now we are both able to enjoy the benefits of the digital nomad lifestyle. When we decided to come home, we knew that we were going to have to find a space that we could work productively. We both have concentration problems at the best of times so working from home was a no-go. Especially as we had moved back into a family home, one with a new baby, 3 siblings, and the in-laws.

During our travels, we had become café addicts. We probably spent more on coffee just to have a space to work then we did on food on a weekly basis. Coffee at home is much more expensive too, so that definitely wasn’t an option. We needed a space that we could work from during working hours. We wanted a space that felt like an office, one that would allow us to feel like we were at work. With all the costs of being a content writer, like paying for a premium plagiarism tool and SEO software, we didn’t want to spend too much.

We started by looking at a serviced office space, but the cost was astronomical, so it was back to the drawing board. Then one day we were driving back from visiting a friend, and as we were heading back towards home, we spotted an advert outside an old abandoned building. “Co-Working space.” So we pulled over and popped our heads around the door.

The inside had been completely renovated. Long reclaimed wooden desks ran down both sides of the space. There was an excellent New York loft feel to the place. Although it wasn’t busy at the time, there were perhaps 15 people in total working, and there was a fantastic hum of energy to the place. I could only describe it as the energy produced by a group of people with creative and active minds.

We had decided before the woman running the space had even noticed us. As she came over, my fiancé and I shared that look and we decided at that moment. Before the woman had even opened her mouth, I stopped her and asked how much it would cost to hire a space big enough for the two of us. The price was less than 30% of what a tiny cubicle sized serviced office would cost us a month. It came with lightning-fast internet, a designated desk with power points and a locker for our stuff. Most importantly, however, it allowed us to work in a space surrounded by like-minded people; for this, we would have paid a whole lot more. The digital nomad lifestyle can get lonely, even if you work with your partner.

All I can say is that if you are considering making the switch to a co-working space, make the switch.

Trust me, and you won’t regret it.