Why business is booming for the launderette of mum and dad 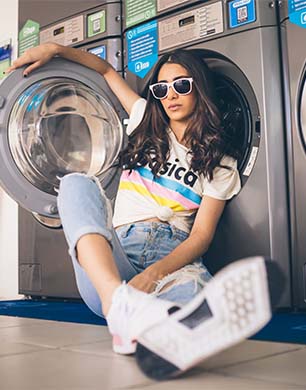 Doing the laundry probably isn’t high on people’s list of enjoyable activities – but it’s something we all need to do. Indeed, on average, a family washing machine is used once a day, Monday to Friday. However, at what age do we think children are old enough to be in charge of their own washing?

At 18? When they move to uni? When they get their own place? What about even after that?! According to a survey by Beko, the average (mean) age for children to stop relying on mum and dad for laundry services are:

It appears that a great many children may be needing the ‘launderette of mum and dad’ when they’re making their first steps into adulthood. This might be down to people living at home for longer as well as the fact that many people have little or no space when they’re renting their first place. Many young people just aren’t quite ready to move on, of course, but there are also others that genuinely fear they’ll ruin their favourite garment by ‘getting it wrong’.

It’s fair to say that no matter how old you are, everyone has probably had one (or more) washing disaster; whether it’s a red sock in the white wash (just like Rachel Green in Friends), or a woolly jumper accidentally put on a hot wash. A quarter of people who take washing to their mum and dad told Beko that this is why they do it.

The top three reasons for relying on the ‘launderette of mum and dad’, however, are:

Whatever the reason – it sounds like a fair It seems that there a fair few bottles and wine and boxes of chocolates owed to mums and dads across the country.