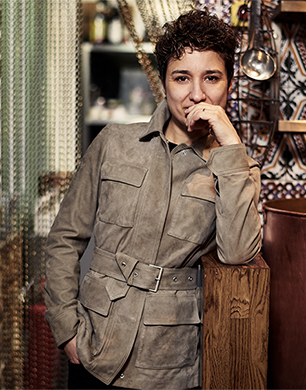 There’s no denying that the UK has a certain love affair with Spain. You only have to look at how many people go there on holiday each year.

This goes back to the 1970s when package holidays became popular and flights became more accessible. But, today, it appears that our love affair has gone from basking in the sun to sitting in a restaurant. Spanish wine was even on course to outsell French wine thanks to the popularity of Rioja.

But, when it comes to food, one place has caught our attention – Sabor.

Sitting in Soho, the multi-regional restaurant opened in 2018 and consists of three parts; a bar, restaurant and asador.

Opened by Nieves Barragan, who was the executive chef of Barrafina for 10 years, and Jose Etura, who was the former general manager of Barrafina, this is a restaurant that celebrates the diversity of Spanish cooking. Making it the perfect place to get a taste of Spain in the UK.

Speaking to Belstaff, Barragan declared it a labour of love, saying:

This passion and dedication have earned the restaurant a Michelin star. Another great reason to visit. So, now that you know the story, let’s dive into the restaurant itself.

Wanting to keep the space as authentic as possible, the whole place is inspired by traditional tapas bars and restaurants that you’d find in Spain itself.

Featuring simplistic tiles, sourced from Andalucía, stripped back wooden floors and an open kitchen, the place creates a fabulous buzz like no other.

As mentioned, Sabor was made to showcase the wonders of Spanish food. But, it’s not what you’d expect.

Being a big place, Spain has many regional specialities, which are showcased here to its truest form. With everything from small plates to a wondrous meat and seafood menu, and not forgetting delights cooked on the grill, whole suckling pigs and a wealth of desserts, you’ll feel like you’re on a trip of the country itself.

You’ll discover a ground floor bar where you can pop in for drinks and tapa. Those visiting will enjoy the tradition of throwing the napkin on the floor, a sign of appreciation in Spain.

Aside from this, the drinks menu is quite small, with a selection of spirits and a heavy focus on Spanish vermouth gin and a few delicious Spanish wines.

So what’s the damage? Find out below:

So, what are you waiting for? Book now and enjoy a taste of Spain in Soho.