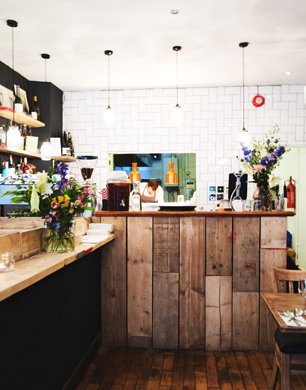 Covent Garden is having a foodie revival, buoyed on no doubt by the abundance of Soho’s culinary success. The latest recruit, and the ruby in Covent Garden’s dust, is the small but perfectly formed Jar Kitchen.

Quietly nestled at the North end of Drury Lane and a mere stone’s throw from the madness of Covent Garden, the Jar Kitchen manages to be both homely and rustic, yet chic and understated at the same time.

The restaurant’s charcoal walls and exposed wood floors serve as dramatic backdrop for the jars of twinkling candles and fresh flowers littered about – an understated nod to the restaurants quirky name.

Owners, friends Lucy Brown and Jenny Quintero, are relatively new to the industry having quit their respective careers in the fashion and publishing industries to pursue their life-long dream of opening their own restaurant. The pair work the front of house, whilst the behind the scenes magic is taken care of by talented Head Chef, Dominik Moldenhauer; formally of Heston Blumenthal’s Dinner.

On arrival we are warmly greeted by Jenny, despite being over 30 minutes late, and shown to our tiny candlelit table. Having decided to kick off with an unseasonal aperol spritz, we sip away happily, casting our hungry eyes over the weekly changing menu. With a focus on modern Eastern European cuisine, the restaurant’s philosophy is to deliver seasonal produce, sourced from independent local businesses.

We finally decide on sharing the crispy ox cheek & cheddar croquettes, which come accompanied by the delightfully subtle smoked onion mayonnaise and the ham hock terrine served on warm, crusty sourdough toast. For mains, we share the flat iron steak with red wine jus and the roast lamb rump with celeriac puree. Both arrive looking every bit as good as they taste. Unfortunately an aperol spritz, a glass of red (or two) and a veritable meat feast later, we are too full for dessert. From the looks of some of the plates drifting past, this is our one mistake.

The Jar Kitchen is one of those restaurants that you selfishly want to keep to yourself. Tucked away from the madness of Covent Garden and serving honest, affordable yet imaginative food, it is the perfect place for any occasion; be it brunch with the girls, an intimate date or a midweek boozy catchup dinner; nothing ‘jars’ and you really can’t go wrong.