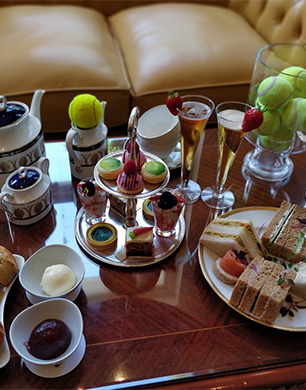 As a lover of ALL things Wimbledon, it took me precisely 2 seconds to agree to attend The Bentley Hotel’s Wimbledon themed afternoon tea. And how glad was I that I did as what a treat it was!

I as warmly greeted by staff upon arrival and immediately offered some iced water on what was, one of the hottest days of the year. The tennis was even playing out on a screen in the waiting area.

Our tea (and in my case, coffee) choices were ordered as well as a generous glass of bubbles which were then followed by an array of mouth watering sandwiches filled with egg mayonnaise, soft cheese and cucumber, tuna and sweetcorn, coronation chicken and smoked salmon. It should be stated for the reader, that the writer is someone whose dietary requirements are a plenty and yet, none of this presented a problem to the attentive staff at The Bentley and I was able to fully enjoy my alternative version with no fuss whatsever.

The sandwiches were quickly devoured and in a very short space of time, we were presented with the most delectable Wimbledon themed cakes, from tennis ball macaroons flavoured with lemon and pistachio to Eton Mess and a Championship praline tart they were almost too good to eat, but eat them I did. So much so, that when the delicious chocolate and buttermilk scones arrived I could not eat another bite…however, fear not, The Bentley provided a doggy bag so I could enjoy these divine scones later that evening.

At the bargain price of £36 pp and only available for the duration of the tournament, this quintessentially British, Afternoon Tea is one not to be missed.