Art, Food, and the Great Outdoors at Llangoed Hall 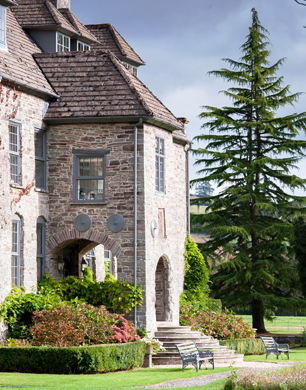 Llangoed Hall enjoys an enviable position in the heart of the Wye Valley, a stone’s throw from the Brecon Beacons. This grand residence benefits from an exceptional collection of art, and some of the finest food in Wales. We don’t know of anywhere better to stay near the Black Mountains.

Llangoed Hall has several centuries of history, but its most fascinating developments took place during the 20th century. In 1912 the house was significantly redesigned by architect Clough Williams-Ellis, capturing perfectly the charm of the Edwardian era.

In the 1980s it was purchased by Sir Bernard Ashley, the widower of interiors maven Laura. He filled the house with his collection of British art, and opened it as a hotel in 1990. Emphasis was placed on keeping the hotel feeling like a private home – the goal was for those visiting to feel like treasure house guests, Llangoed their country pile.

Today the hotel boasts the original art collection installed by Sir Bernard, an immaculately maintained series of gardens, and an award-winning gourmet restaurant.

There’s lots to do at Llangoed Hall before you step out of the door. The hotel’s aforementioned collection of paintings will delight art buffs. Works by James McNeil Whistler, Herman Dudley, Henry Scott Tuke, Walter Sickert, George Spencer Watson, and Augustus John are displayed. The works are of such significance that the hotel had a large catalogue of all their histories bound in leather. Guests are free to flip through while enjoying a drink in the drawing room.

Green fingered guests will find endless inspiration in the formal gardens, which are meticulously kept and beautifully planned. The Brecon Beacons was named an International Dark Sky Reserve zone, and hotel also has its very own telescope which guests can use to stargaze. Younger guests will be enraptured.

The bedrooms at Llangoed are traditionally decorated with antiques and tasteful Laura Ashley fabrics. Those with particularly contemporary tastes will need a moment to adjust, but it isn’t long before they win you over. Supremely comfortable, most rooms feature four poster or canopy beds with plush down bedding and blankets. Large decanters of sweet sherry and cut crystal glasses are strategically placed by seating areas, tempting guests to relax with a tipple before dinner or bed. The hotel is particularly good at putting its guests at ease, with comfortable seating areas and roaring fireplaces around every corner.

Bathrooms are all brand new and spotless. Many feature free standing, claw footed tubs and separate monsoon showers. Toiletries are provided by Penhaligon’s and bathroom china by Halcyon Days.

We had high hopes for dinner at Llangoed Hall. Under the watchful gaze of head chef Nick Brodie, the accolades for the cooking here have poured in. The restaurant has been named in the top 50 in the UK by the Good Food Guide, the top 100 by the Sunday Times, and holds three AA rosettes for culinary excellence.

There are several menus to choose from, both tasting and a la carte. Our meal began with an amuse bouche of truffled scrambled eggs. Quite simply the best scrambled eggs I’ve ever tasted. This was followed by yeast-crusted Pollock, a refreshing scallop and caviar ceviche, and the pièce de résistance, venison fillet with lichen and mushrooms. The meal closed with a chocolate sphere filled with candied chestnuts and praline ice cream.

Whilst this restaurant is widely well-reviewed and admired, for reasons I cannot understand it doesn’t have a star. Yet Brodie manages to navigate the fine line between exquisite and overwrought, and in so doing he nails the ideal balance between complexity, interest, and pleasing yumminess.

You have the Wye Valley, the Brecon Beacons, and Pen y Fan on your door step, so walkers will rejoice. The hotel can lend guests Wellington boots and advise guests of particularly pretty routes.

Llangoed Hall is also nearby the small town of Hay-on-Wye, popularly known as the bookshop capital of Britain. One of the world’s most important literary festivals is held in the town, and guests that have taken up residence in the hotel while attending include Jane Fonda, Lauren Bacall, Prince Charles, and Salman Rushdie.

Bedrooms from £150 a night. Llangoed Hall is around a three hour drive from central London.