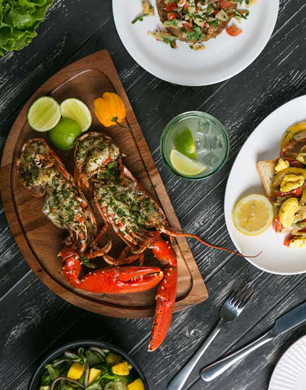 Best jerk chicken in London according to Grace Dent. A claim I wanted to follow up with a visit of my own. Rudie’s probably has the loudest social media voice of any Caribbean restaurant in London; reviews, tweets, and grams of their spicy delicacies are all over the place. Social media fanfare doesn’t always translate to good cooking, but in this case I found food that was delicious, finger-licking, and authentic.

Rudie’s is in hip Stoke Newington. Which, whatever folk much cooler than I might say, makes it a bit of a pain to get to for non-North Londoners. My phone told me it would be an hour on the tube from Fulham, or 84 minutes on a bus. Uber to the rescue then. The restaurant is on a fairly busy, yet-to-be-gentrified high street – the kind that has fifteen off-licences and an independent mattress shop. Rudie’s sits amongst it all a beacon of millennial sensibilities; someone’s branding team have clearly been to work on the sophisticated signage and logos. It was packed to capacity when we visited, giving it the buzz that a restaurant serving this kind of lively food really must have.

Drinks menus are fun, with a selection of cocktails and various sharing pitchers. The cocktails taste like holiday; sweet, brightly coloured, fruity, and predominantly rum based. Those with a sweet-tooth will be in heaven. The menu features starters/small plates, a jerk grill section, main courses, puddings, and side dishes. We began with grilled oysters with scotch bonnet butter, jerk battered soft shell crab, and “Port Royal” patties. All was great, but when is soft shell crab not? The patties – a kind of Jamaican street food consisting of golden pastry filled with spiced meat and vegetables – brought an instant flashback to my own Caribbean travels.

Main courses looked appetising; we caught sight of a fellow diner’s enviable goat curry, but it was the jerk goodies we were there for. Smoked and cooked over traditional steel drums, four different varieties are available: chicken, lamb rump, swordfish steak, or lobster. The chicken was as succulent as we’d hoped for, with a satisfyingly sticky and blackened jerk coating. Lobster could have done with five minutes less on the drum, but again the flavours were top notch. Sides include sweet potato fries, sweet plantain, spring coleslaw, and of course rice and peas.

The options for pudding included banana brulee, chocolate mousse, and a rum cake. It was the latter we had to try; a ring cake saturated with Jamaican rum and served with vanilla ice cream. Sheer bliss.

Grace, as usual, was right. Rudie’s serves mouth-watering Jamaican food that doesn’t lose too much authenticity despite its journey from across the Atlantic.