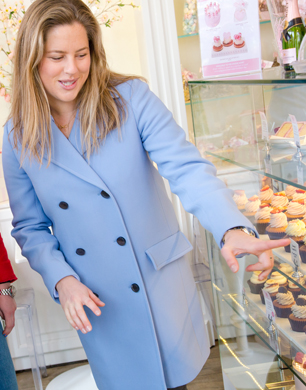 Having lived in London for a few years I thought I knew my way around enough the food scene to not need any tours, I could not have been more wrong. The Sweet Tooth Tour has opened my eyes to a number of great secret spots in London.

Sweet Tooth Tours was the brainchild of Lynne Staartjes, a cordon blue trained pastry chef, however, the title does not do her justice. Lynne’s knowledge of all of the stops on the tour and everything foodie related was impressive to say the least. Not only will you be educated at each stop about the offerings available but Lynne will also explain the how things were made, their inspiration, a bit of history AND point out interesting buildings, statues and other independent foodie hotspots whilst you’re walking in-between each stop.

We started our tour at R Chocolate, located a short walk from Sloane Square. The quintessential chocolatier is owned by Sir Evelyn Rothschilde and pays homage to his childhood dream of owning a ‘chocolate factory’. Lynne talked us through some of their more notable offerings, the dark chocolate elephants filled with salted caramel – which were to die for – and a rosemary and raspberry infused dark chocolate. Lynne also educated us on the method of making chocolate and the difference in qualities of chocolate on offer on the market today.

From there it was a short walk to our next destination Olivogelo, this is a Gelateria run by the Olivo brand who run a number of restaurants in the area. Here we were greeted by the friendliest staff who invited us behind the counter and into their ice cream kitchen. We were given a full demonstration of how they make all their ice cream fresh on site, with the hostess making a fresh batch of stracciatella (a milk ice cream with fine shavings of chocolate) in front of us. Once the demonstration was complete we were allowed to pick a tub each, we went for a rich hazelnut gelato and a refreshing strawberry sorbet; both of which were delicious! It’s safe to say that we will be heading back here when summer comes back around.

Our next stop was a spectacular hidden gem, Pierre Herme, a shop run by ‘the Picasso of the Pastry world’. Lynne had lined up something truly unique here, a blind taste test. We were educated on Pierre’s unique flavour pairings and how he has the ability to pair distinctive and wonderful flavour combinations. Eye masks on, we were handed the first of our three macaroons, this was a homely taste which was easily identified as Salted Caramel. The second macaroon was clearly lemon but the second ingredient of yoghurt clearly escaped our seasoned taste buds. The final macaroon was the most unusual and delicious of the three, despite a number of guesses the store manager had to give us this one and identified it as a speciality for the store Raspberry, Rose and Lychee! The manager of this store was very passionate about the macaroons and all the offerings in the store and her enthusiasm was contagious. Lynne had also worked in the store in Paris and knew the answers to all of our questions.

Our final stop was much like the ending of a dinner party, the cheese course. Being from Bath I was familiar with The Fine Cheese Co. however, did not know they were now open in London. The shop was painted the loveliest mint green and we were greeted a wall of cheese and another friendly specialist. The cheese specialist in the store had a great knowledge of everything on offer and had prepared a mixed cheese board for us, mixing up Gouda, American goats cheese and a blue cheese with a variety of crackers and dried fruit. We were talked through the process of each cheese and how they’re made as well as where they have come from and what works best paired with each cheese.

The passion and friendliness of the staff and Lynne at each stop was something I cannot express enough. A bold statement, but I can definitely say that I have never been on a more enjoyable tour. Not only did Lynne ensure that we left with a full tummy but we also learned so much about the London food scene and each particular offering.

As well as leaving with an improved knowledge of the London food scene we also left feeling inspired. The breadth of great food in London is always bigger than you think and the Sweet Tooth Tours really highlight that not all good is to be found in the cool spots but that there are some amazing independent shops to be had in the most beautiful spots in West London which have something for everyone’s price range.  We are certain that we will be booking in for another tour soon when we have family members or friends in town or even if we simply fancy an indulgent treat!

Prices start from £48 per person