StyleNest brings you the London Fashion Week show roundup from Days 4 & 5 of the Autumn/Winter 13 collections.

London Fashion Week has drawn to a close and whilst our legs may be weary, our spirits are still high as we reflect on the last 2 days oof the Capital’s most stylish event. 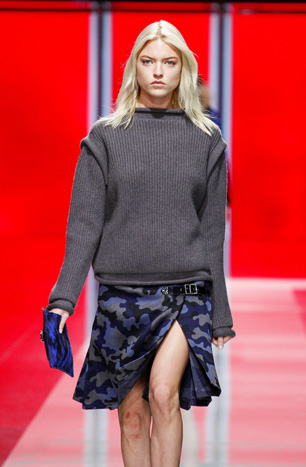 First up was Peter Pilotto which opened with a punchy Spanish matador inspired jacket. Famed for Pilotto’s signature style prints were married with contemporary shapes and bold colour. Exaggerated shoulder details, boxy silhouettes, graphic prints were a welcome addition to the designer’s usually soft and feminine designs. Bold and elaborate embroidery contrasted with the graphic prints, ideal for the confident woman of AW13.

Next up was man of the moment and the show we’d all been waiting for – Christopher Kane, and it was well worth the wait. The front row welcomed the PPR conglomerate and Kane himself insisted that this show was a “celebration”.  What unfolded was an elegant interpretation of 90s grunge . Bikers, rib knits, crop tops, statement coats, oversized fur trims and punky camo prints. Velvet and off-the-shoulder dresses gave a luxurious touch to the collection – nostalgic yet modern.

Next up was Erderm and similarly to the Katrantzou show, black is back. A keen advocate for all things bright, Erderm Moralioglu switched his rainbow shades for those of a more sombre palette. The show opened with a black tweed shift featuring delicate tuelle underskirt and matching tweed cropped jacket. A sequin embellished dress with tulle collar offered the collection a luxe edge and as the models continued, a peephole of colour emerged with accents of neon orange florals juxtaposed against black, as well as touches of yellow and maroon. Ostrich feathers gave the collection depth and a gothic intensity but the underlying theme was the movement of the tulle.

A British classic, Burberry, saw Christopher Bailey rework the classic trench with a new collection entitled Trench Kisses. The classic honey trench was revived in a sheer latex and gold metallic pocket embellishment. Ladylike and elegant, 60s inspired pencil skirts were paired with sweaters but the favourite for us had to be the kitsch heart print motifs which adorned shirts and dresses. Burberry delivered another triumphant collection packed full of print and texture and in true Burberry style, gave classic shapes a sexy edge. 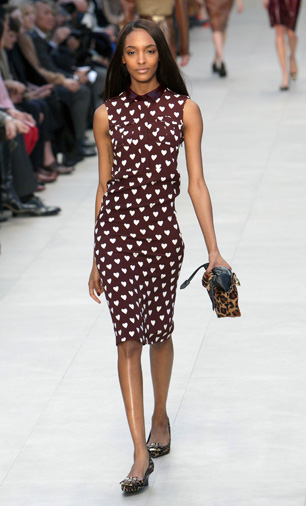 The penultimate show of the evening was Tom Ford and out came a splendour of sequins, monochrome and florals. The show opened with an Art Deco poncho paired with over the knee boots in a Native American tone. Next, came the sports glamour with a sequinned bomber paired with a lace pencil skirt. Ford shocked us with cartoon kapow star explosions and leopard print bombers as well as neon pink patchwork print. Although a complete contrast to his previous collection there was still an air of glamour and luxury that no one does quite like Mr Ford.

The last show of day four was J.W. Anderson. The contemporary collection was highlighted around long sleeve shifts and slitted skirts, all paired with plimsolls for a typically urban London look. The clean lines, high necks and bandagesque belts mimicked a ninja vibe and reminded us of a younger Hemlut Lang. We also saw comic book prints for the more daring woman and skater style trousers paired with fur tunics. In true Anderson style it was quirky, fun and unique.

The last day of London Fashion Week opened with the spectacle of the Anya Hindmarch show. As we sat and waited anxiously, we were transfixed by the stage of rainbow coloured dominoes. With 50,000 dominoes before us in 37 colours, this was no small operation. In fact it took 7559 of man hours and 59 pizzas to create this masterpiece and we haven’t even seen the bags yet. With only one chance to get it right, the animatronic switch was flipped and everyone was waiting anxiously in their seats. The dominoes trickled down gracefully like a rainbow river until a podium of bags rose from a trap door, revealing the theme of the collection, Cascade, inspired by play and the graphic natures of board games. Domino and backgammon board clutches make for a playful yet sophisticated option for a ball and the Albion rectangle tote has been created using heat-sealed leather for a seamless finish. 1356 cups of tea later and one hitch which was remedied by a cascade technician and a roar of applause, the Anya Hindmarch AW12 certainly had a domino effect on us. 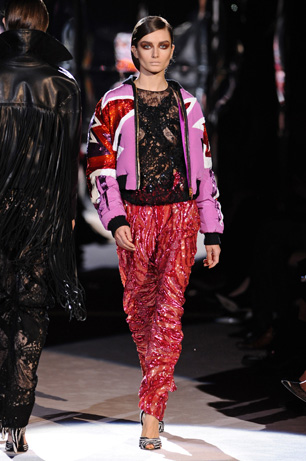 Next up was Roksanda Ilincic which took place at the oh so glamorous Savoy Hotel. The lady-like collection featured over the knee length skirts and cinched waists in punky muted checks and pastel pink PVC and neoprene. A neon orange mohair collar offered an 80s punk rock vibe but the rest of the contrasted muted colour palette gave somewhat ethereal look. Colour juxtaposition and long hemlines present a feminine and delicate collection for the self-assured woman.

Let’s hope its not cold this AW13, as Emilio de la Morena bared all for the next season with risqué thigh-high slits, angled at just the right degree with geometric cut-outs. The first look made an impact with the octagonal print top and oversized coat and the collection’s theme filtered through with a slouchy wool boiler suit style jumpsuit which we predict shooting off the shelves next season. Wide leg trousers in sumptuous berry burgundy paired with an oversized wool jumper offered a sharp, sculptured and tailored look. Overall, some very strong pieces which won us over.

This London Fashion Week, we have seen a blast of burgundy and animal prints at Tom Ford and 3.1 Phillip Lim, a revival of the 80s punk with Scottish tartans and kilts seen at Roksanda Ilincic and Chris Kane and more statement coats than we can remember.

Top tip: Hang on to your pastels from your SS13 wardrobe, as they can be recycled with an oversized coat and pair of Oxford’s for the ultimate AW13 look.