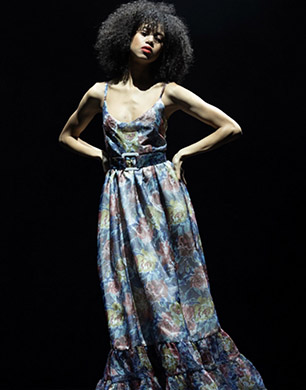 With Storm Dennis dead set on disrupting this season’s LFW, it was always going to be wetter than average one, but spirits were not entirely dampened.

My season started with a beautifully curated, airport themed presentation at the (very pared back) BFC for One to Watch, EFTYCHIA. Then, I was off backstage at Temperley, where the hair looks, led by Britt Dion for Aveda, were inspired by Vintage Hollywood glamour and at the presentation itself, it was a pure delight to witness the models dancing in all their splendour. A hop skip and a jump to Fashion Scout to see a very wearable Rocky Star collection, before heading to see one of my shows of the season; University of Westminster, this show is always packed to the rafters and with former alumni such as Roberta Einer and Ashley Williams it’s not hard to see why…the student’s collections are endlessly inspiring, entertaining and often significantly more polished than more established designers. As up and coming new talent, their hunger to succeed is clear to see in their collections and it is, imho, an unmissable spectacle. Last up, on a very wet and cold Valentine’s Day was the inimitable Malan Breton, beautiful clothes in a beautiful location, the show was a masterclass in tulle.

Saturday and weather proofed clothing clad for Storm Dennis,  I started my day at the BFC for a British Fashion Council breakfast with Caroline Rush, Iceberg, River Island & MTV to announce an exciting competition to launch a young designer’s career. It was then back to Fashion Scout for a gorgeous Isabel Mann presentation, a young designer we will deffo be seeing more of and a suitably edgy catwalk show from Underage. A blustery schlep to The Truman Brewery for the some Mimi Wade deliciousness and my day finished at Kimpton Fitzroy for a delectable Rixo X Lacroix collab – a departure for the typically boho brand with some decidedly 80s Dynasty looks, more in keeping with La Croix. Full marks to Rixo for the food and drink, the cocktails were divine and very much appreciated after a bleakly, stormy day and the sugary delights kept this Fashion Ed going on her less than joyous 4 hour rail replacement journey home…all in the name of fashion.

Sunday, still stormy and with my pre selected outfits not cutting it I resorted to a full on Babushka look with a headscarf as the brolly just couldn’t hack it. It was an early start for me with a presentation by Katie McGuigan, a designer I really, really love and wish only good stuff for, her collections are just so beautifully thought out, they never fail to make me smile and I even spotted a headscarf look at this presentation so I felt right at home.  Back to Fashion Scout for Future Collective and I finished the day with Pam Hogg, the most audacious designer on the block.

Monday, storm Dennis gone but still a bitingly cold start at the insanely beautiful Bora Aksu, an  absolute preppy, tulle delight from start to end. Then to my presentation of the season at Edeline Lee, directed by my favourite Director, Josie Rourke, whom I’ve had the pleasure to style, this presentation truly surpassed all expectations and I have waxed lyrical about this piece of theatre to all and sundry, one word a, TRIUMPH. Over to the Serpentine for my last gig of the day, the achingly consistent, Johnstons of Elgin, this heritage brand never get it wrong, season after season they effortlessly produce *the* most gorgeous knitwear.

Tuesday, or day 5 and it was a super early start at Mark Fast as I chatted backstage with Hair guru, Maria Kovacs as she explained the Bardot references behind the catwalk looks created by TIGI. This show was a suitably impressive end to the season and it is great to see that Mark is now doing Menswear too. A great designer like Mark shouldn’t limit himself just to womenswear.

Over and out…see you in June for lfwm.