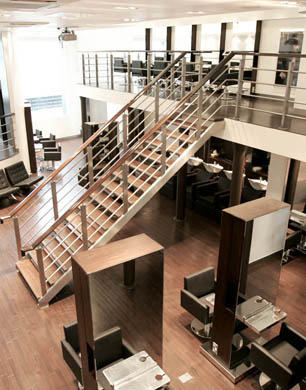 To say that my hair needed some work before my appointment at HOB Salon in Camden would be an understatement. I’ve been a highlighting for over twelve years now; always a half head of blonde highlights (with the exception of one questionable brunette phase which I’ve since systematically removed all evidence of) which by this point had moved from starting at my roots to somewhere around my ears.

There are numerous HOB salons in London, and the Camden branch is said to be the most creative in their approach. Once I’d managed to find it (my reliance on google maps is faintly embarrassing) I was struck by the cool, warehouse feel of the salon and the even cooler people: everyone was beautiful, with great hair. Fingers crossed it rubbed off.

After twelve years, I now know the colour I’m after: ash blonde, cold blonde, platinum. My colourist, David, understood immediately, assuaged my fear of stripy hair and fetched me a glass of wine to see me through the foiling process. I figured if it takes almost as long as a three course meal, a glass of red is a natural accompaniment.

With summer on its way I decided to do a whole head of highlights instead of my usual half head. David used two colours, one bleach and one closer to my natural hair colour and the result was a perfectly ashy blonde which is bright but natural. Having a full head of highlights worked well, reducing the contrast between my natural colour and the platinum blonde strands.

I have fine hair and when it gets too long it becomes straggly so I decided to take a good few inches off during this appointment. My bravery was quickly undermined by the woman opposite me, with beautiful thick hair to her waist, very nonchalantly requesting it to be cut to her chin. Chris trimmed my hair to just above my shoulders (while I clutched at my wine) but he left the front section slightly longer to give it weight. He created some much needed body and I’m inching ever closer to terrifying bob territory with every cut.

As a parting gift, the team gave me some WELLA products to use at home. Having filled in the Energy Code questionnaire online they knew what I needed to maintain the just-left-the-salon look: repair shampoo for my split ends, volumize mask to counteract the fineness, and the reconstructive elixir which is amazing for flyaways.

I left the team at HOB salon feeling like a new woman, and if I’m honest, a little tipsy.